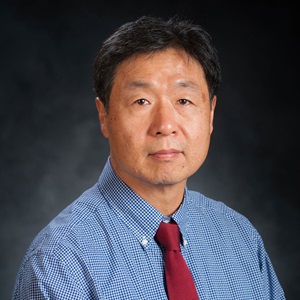 S. J. Jung is professor of Geological Engineering in the Department of Civil & Environmental Engineering. He has been extensively involved in a number of projects in the field of rock mechanics, fracture mechanics and feasibility studies. Currently, he is involved in research to enhance the understanding of the fracturing process of rock during erosion. In addition, he has been investigating failure mechanisms of pavement under fatigue loading as well as fracture growth during hydro-fracking for utilizing geothermal energy. Jung attended West Virginia University receiving his master's in mining in 1984, followed by a doctorate in mineral engineering from West Virginia University in 1989. His graduate work at WVU was comprised of a three-part investigation including theory, experimentation and field work. Upon graduation, he accepted a position at the University of Idaho as an assistant professor. He was promoted to associate professor in 1995 and to professor in 2002. He is an active member of the SME and USRM. He has authored or co-authored over 90 papers and/or presentations on subjects varying from rock mechanics to fracture mechanics. He has received over $2.3 M in research grants since he joined the U of I faculty.