U of I Barn Owl Boxes Changing Perspectives

A long-running University of Idaho Extension project to build, distribute and monitor wooden houses for nesting barn owls is wrapping up, but Idaho farmers who have struggled to control ravenous voles should enjoy lasting benefits.

UI Extension educator Jason Thomas has sold about 150 owl boxes since starting the effort. He’s offering to sell his remaining inventory at the discounted rate of $100 each and plans to transition to projects involving biological control of insects, including distributing bat boxes. His owl box plans can be accessed free online.

Thomas estimates voles are being held in check throughout 76,374 acres of Idaho agricultural land thanks to owls using either the boxes he’s sold or boxes built by landowners who have used his design.

Thomas launched the popular owl box program shortly after starting at U of I in 2018, seeking another means of helping farmers who were sustaining heavy crop losses to voles (pdf). The farmers were spending thousands of dollars on the primary tool available to them — the rodenticide zinc phosphide — and were still losing large swaths of their grain, hay fields and pastures to the rodents.

“As I went out to cereal fields, there were islands of dead ground in the middle of the field where 10% to 20% of the field was just this dead stuff because they had such a high number of voles,” Thomas said. “They talked to me and said, ‘We wish we could do something about this.’”

He found information about how owl boxes were being used to help control rodents in California. To fund his own project in Idaho, Thomas obtained about $4,000 from UI Extension and a $3,000 mini-grant through Western Sustainable Agriculture Research.

A California bird bander and woodshop teacher allowed Thomas to use his design, and Thomas made his own tweaks. The wooden boxes have an elliptical hole — 3.75 inches by 4.5 inches — to allow owls to enter while keeping predators out. Grips below the hole help owls get in and out. They’re built to last 30 to 40 years.

Each box has a door in the back or bottom that opens to facilitate cleaning. Thomas recommends cleaning the boxes every couple of years while wearing an N95 respirator mask for protection from diseases spread by birds.

Thomas has recruited Idaho youth, including Boy Scouts in need of an Eagle project, to help build the boxes. He’s also worked closely with the school districts in Minidoka and Power counties and Mini-Cassia Juvenile Probation. Students at J.R. Simplot Elementary School in American Falls build the boxes annually during their ecology day.

Thomas has monitored his owl boxes regularly to assess occupancy rates. Dietary studies show a family of barn owls consisting of two parents and five owlets can eat more than 2,000 voles within the three-month span before the brood reaches maturity. Anecdotally, he’s noticed owls tend to avoid using boxes placed within 500 meters of an occupied home or a frequently visited building.

“Where we are seeing activity is away from humans,” Thomas said.

Nests can be mounted on a pole or tree. Thomas advises locating them at least 6 feet above the ground for protection from predators, and he suggests mounting them no higher than 12 feet to ensure they’re easy to clean and maintain.

Thomas estimates the average occupancy rate of his boxes has been about 75%.

Sean Mallett, with Harmony Organic Dairy in Twin Falls, has been using owl boxes for vole control since 2015, when the Magic Valley experienced a major outbreak.

“They were destroying everything — winter wheat, pasture, everything. They wiped out 300 acres of our pasture,” Mallett recalled.

Mallett found an owl box design on the internet and had someone build him about 40 boxes, which were placed about 40 acres apart. He’s also set boxes adjacent to additional fields he’s acquired throughout the past seven years.

“We really haven’t had a problem since,” Mallett said, adding using the boxes helped him meet requirements of the biodiversity section of his organic systems plan. “Overall, I think there’s been a great benefit to our farm utilizing these owl boxes.”

Thomas acknowledged owl boxes aren’t a cure-all and farmers and ranchers who put them up may still need to use some zinc phosphide. One of the greatest benefits of the owl boxes in Thomas’ opinion is that they’ve led the state’s agricultural producers to think more broadly about their approaches to integrated pest management.

“The whole purpose of this barn owl project is to help farmers and other people understand there are more options besides just pesticides,” Thomas said. “We’re trying to help farmers change their mentality.” 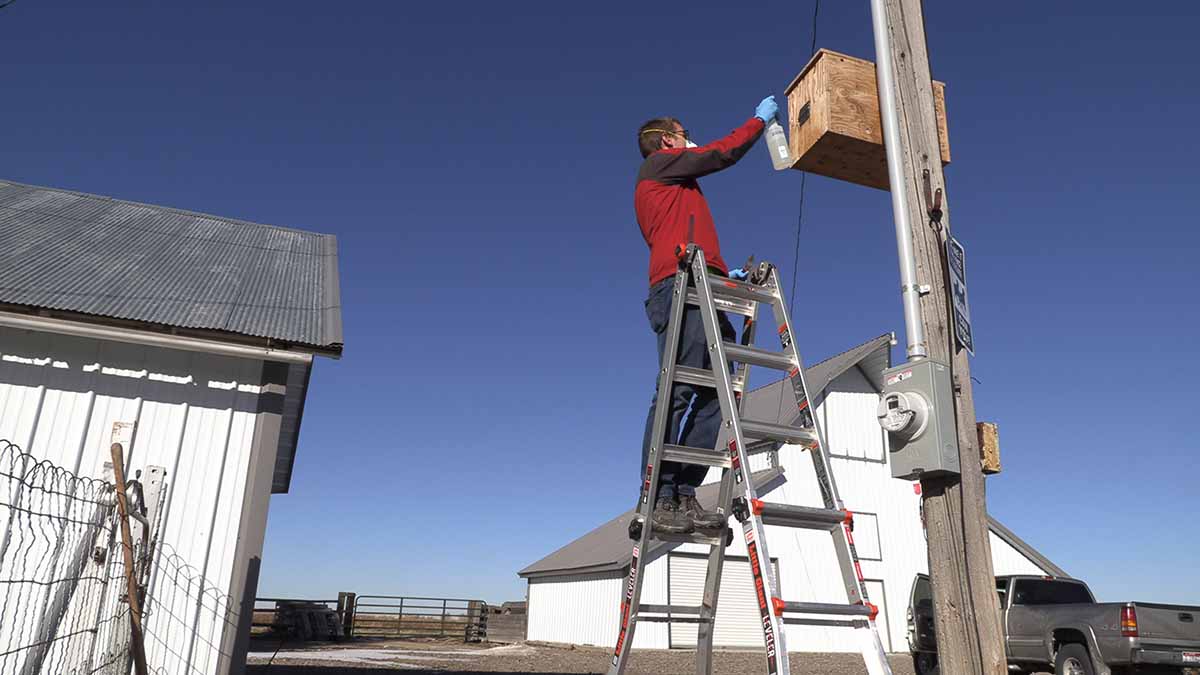