University of Idaho Extension weed specialist Albert Adjesiwor is warning the agricultural industry about a looming problem for Idaho farmers — herbicide-resistant pigweeds that tower over commercial crops in fields.

Native to the desert southwest, Palmer amaranth is now widespread throughout the continental U.S., except for the Pacific Northwest, Montana and a few states in the northeast. Adjesiwor is advocating quick preventative actions to stave off the troublesome weed’s arrival to the Gem State.

The weed could be introduced into Idaho through cover crop blends or contaminated hay, or cottonseed meal imported from other states as livestock feed. Palmer amaranth has a hard seed coat that can pass intact through the digestive tracts of cattle, making manure a potential source of contamination. Tainted birdseed and farm equipment are other potential means of introducing the weed.

A few years ago, Palmer amaranth was discovered in Idaho’s Washington County near a feedlot, where it was believed to have been introduced via cottonseed. It was controlled and hasn’t been found in the state since.

"I'm sure we’ll get it. It’s not a matter of if; it’s a matter of when,” Adjesiwor said. “My hope is at that time we’ll have programs in place. People will know enough about this weed and will know what to do.”

Adjesiwor would like to see the Idaho State Department of Agriculture add Palmer amaranth to Idaho’s noxious weeds list. That would allow the state to commence with tracking and scouting for the weed — and to respond rapidly when it surfaces. New weed listings bring additional testing requirements and regulations, which could be burdensome but ultimately preventative for producers.

“That’s the dilemma. Do you do something, or do you wait to find it and then tell people how to get rid of it?” Adjesiwor asked. “By the time you find it, it’s probably bad enough that it’s hard to get rid of.”

Earlier this summer, a close relative of Palmer amaranth, waterhemp, was discovered for the first time in Idaho growing in an Elmore County sugar beet field. The weeds withstood multiple applications of glyphosate herbicide.

Adjesiwor and Pam Hutchinson, U of I potato cropping systems weed specialist, plan to hire a graduate student who would screen manure samples from large dairies throughout Magic Valley for Palmer amaranth seed.

“We’re hoping if we do find it in any manure we can tell people, ‘This is real. It can happen,’” Adjesiwor said.

He advises producers to spread a small amount of manure in a plot to see if any weeds germinate before applying it throughout fields. Anyone who detects Palmer amaranth should also make certain to destroy it before it goes to seed. Planting clean, certified seeds and sanitizing machinery can also prevent the spread of the weed.

Palmer amaranth has a diamond-shaped leaf and its petioles — the stem-like structures connecting the main stem to the leaf blades — are longer than the leaf blades.

Palmer amaranth has developed resistance to at least nine herbicide chemistries. Some populations can be treated with dicamba and 2,4-D. Other populations have already developed dicamba resistance.

“If you think kochia is bad, this is worse,” Adjesiwor said.

In August, a U of I master’s student, Prayusha Bhattarai, commenced with a project to proactively develop management strategies for such herbicide-resistant weeds. Funding for the research comes from a two-year, $100,000 ISDA grant, secured by the Idaho Bean Commission.

The grant will cover four different weed resistance scenarios, using various combinations of herbicides and fall-planted cover crops to help keep resistant weeds in check. Triticale, wheat and barley will be used as cover crops to suppress weeds by outcompeting them. 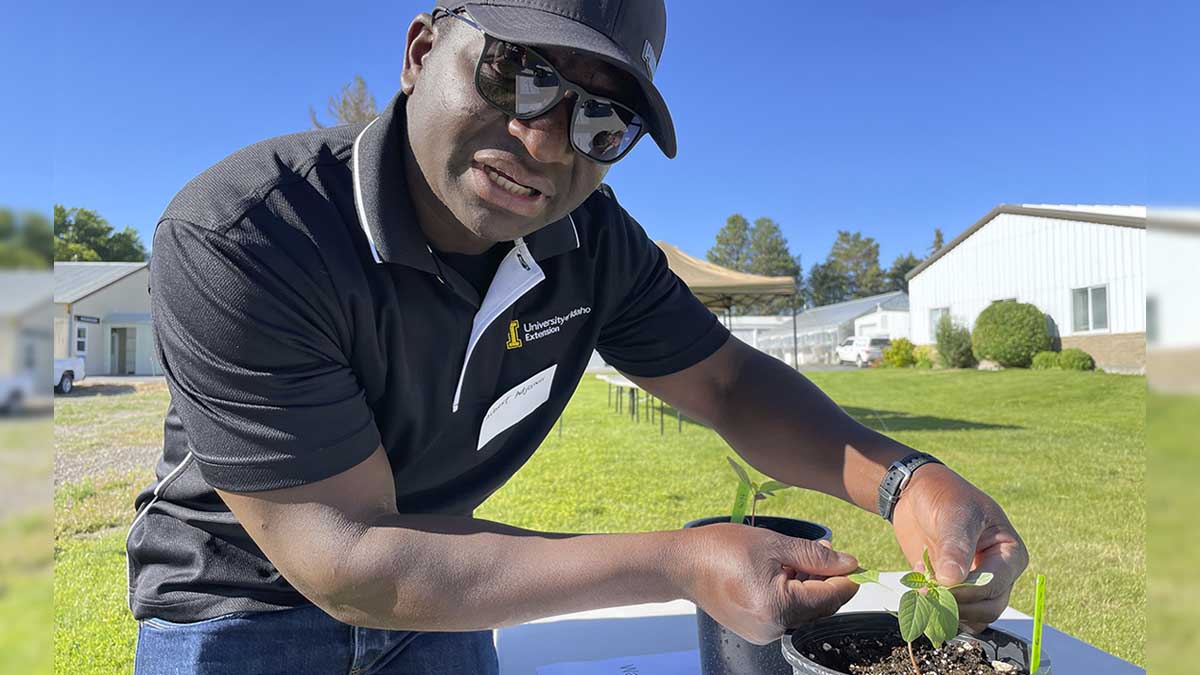