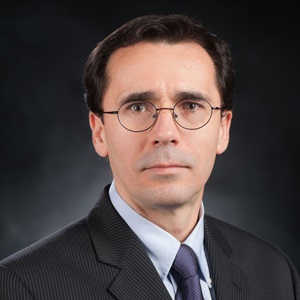 Gabriel P. Potirniche is an associate professor in the Mechanical Engineering Department at the University of Idaho. He received his doctorate in 2003 in mechanical engineering from the Mississippi State University. Afterwards, he joined the Center for Advanced Vehicular Systems at MSU as a postdoctoral associate. He joined the University of Idaho in 2007 as an assistant professor. His research is focused on the modeling of the mechanical behavior of material. He has implemented computational models for the study of fatigue damage at the nanoscale using molecular dynamics methods, at the microscale using crystal plasticity theory, and at the macroscale using classical isotropic plasticity and anisotropic yield functions.

Potirniche has also performed computational studies of ductile fracture in crystalline materials under quasi-static and dynamic loading. Potirniche has also been developing constitutive models for the visco-hyperelestic behavior of polymer materials subjected to impact and ballistic loads. Recently, he has been working on creep-fatigue crack growth modeling for temperature-resistant austenitic and martensitic steels.

Potirniche is a member of ASME and ASM International. In 2007 he received the “Orr Early Career Award” by the Materials Division and Awards Committee of the ASME. In addition to his research, Potirniche teaches solid mechanics courses at the University of Idaho.