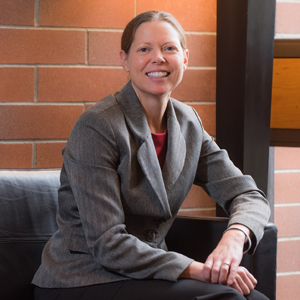 Having taught as a Visiting Associate Professor and as an Adjunct Instructor for many years, Jessica Long is not new to the college, but she has now been appointed as a permanent member of the faculty with the rank of Associate Professor
She supervises the General Practice/Domestic Violence and Sexual Assault clinic and teaches Lawyering Process and Trial Advocacy. Professor Long joined our faculty as an adjunct instructor for Lawyering Process in spring 2009. She took over as lead instructor for the course in 2010 and has taught the course for the past 3 years.
Professor Long grew up in Northern California and attended Cal Poly State University, graduating magna cum laude in 1996 with a degree in Political Science. After working for a year as a legal assistant in the patent litigation arena, Professor Long attended law school at the University of Colorado, Boulder, where she earned her J.D. in 2000. During law school, Professor Long interned with the Jefferson County District Attorney’s Office and Colorado Legal Services.
Professor Long embarked on her legal career as an associate attorney with a small firm in Cheyenne, Wyoming. She specialized in family law and family-related matters throughout Wyoming and Northern Colorado. In 2003, Professor Long and her husband moved to Madison, Wisconsin. Professor Long worked as an investigator with the Office of Lawyer Regulation, investigating complaints involving alleged violations of the Rules of Professional Conduct.
In 2004, Professor Long accepted a position with the Madison City Attorney’s Office. She worked in the prosecution division of the City Attorney’s Office, prosecuting civil ordinance violations, including drunk driving offenses, retail theft, disorderly conduct, underage drinking, traffic tickets, and parking tickets. She was lead prosecutor for juvenile matters and all building and zoning code violations. Finally, she provided training for the Madison Police Academy on testifying effectively in court, wrote advisory opinions for the Common Council and the Mayor, and assisted with ordinance drafting.
In 2007, Professor Long moved with her family to Moscow, Idaho, where she lives with her husband Jerry and their two sons. In her free time, she loves going on adventures with her boys, mountain biking, running and gardening.