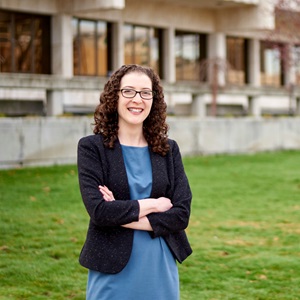 Aliza Cover joined the faculty of the College of Law in 2014. Her teaching and scholarly interests focus on criminal law and procedure, capital punishment, evidence, and constitutional law. Before moving to Idaho, she was a Westerfield Fellow at Loyola University New Orleans College of Law, where she taught Legal Research & Writing, Moot Court, and a course on the death penalty. Professor Cover earned her undergraduate degree in English and her J.D. from Yale. During law school, she served as a student director of the Immigration Legal Services Clinic and spent her summers at the Refugee Law Project in Kampala, Uganda, and at the Lawyers' Committee for Civil Rights of the San Francisco Bay Area. She was the Public Editor of the Yale Law Journal and co-chair of the Rebellious Lawyering Conference. After graduating, Professor Cover clerked for Judge Stephen Reinhardt on the United States Court of Appeals for the Ninth Circuit, then worked as a staff attorney at the Louisiana Capital Assistance Center in New Orleans, representing indigent defendants facing the death penalty.