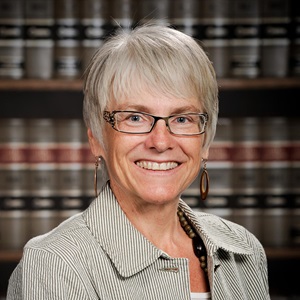 Elizabeth Barker Brandt was born in 1957. She obtained her B.A. in Speech and Theater from the College of Wooster in 1979 and her J.D. from Case Western Reserve University in 1982, where she was elected to the Order of the Coif. She was admitted to the Ohio Bar in 1982 and is currently on inactive status. Brandt practiced law in Cleveland, Ohio with Hahn, Loeser and Parks.

Brandt teaches Community Property, Family Law, Children & the Law, Domestic Violence & the Law, and Wills and Trusts. She has been involved with a number of student groups, including the McNichols Moot Court Competition and the National Lawyer's Guild Student Chapter, the ACLU of Idaho Student Chapter and the Sexual Orientation Diversity Alliance. Brandt is a past Alan G. Shepard Distinguished Professor and is a recipient of the University of Idaho Award for Teaching Excellence. She has received three Alumni Awards for Teaching Excellence and has been the recipient of the Peter E. Heiser Award for service to law students three times.

Brandt is a member of the editorial Board of the ABA Family Law Quarterly and the Executive Committee of the Family and Juvenile Law Section of the Association of American Law Schools. She has published articles dealing with child custody, domestic violence, family court organization and reform, community property, U.S. terrorism policy, the first amendment, and academic freedom.

In addition to her academic work, Brandt is a past president and member of the Board of Directors of the ACLU of Idaho and a past member the National ACLU Board. She is the mother of seventeen-year old twins. She is active with Girl Scouting, and director of the bell choirs at her church. She enjoys reading, knitting, sewing, and stenciling.