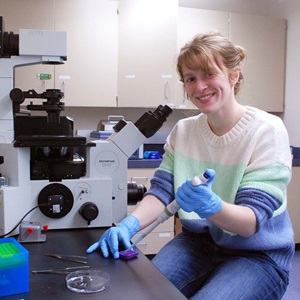 Mareyna’s Hands-On Experience is Made Possible Through:
National Institutes of Health (NIH) Grant – the largest public funder of biomedical research in the world.

Mareyna’s Research:
Tendon is primarily made of collagen. Matrix metalloproteinases (MMPs) are enzymes that degrade collagen, to rebuild, heal and reinforce existing tissue.

By treating collagen sponges, called scaffolds, with MMPs, Mareyna Karlin is gathering data and trying to form conclusions on the number of MMPs present and their resulting degradation levels. Since MMPs are present during tendon development, it is thought that knowing more about how MMPs work to degrade collagen is an important step toward finding a tendon replacement.

MMPs are tightly regulated in the body, Karlin said.

“You don’t want your collagen to be degraded all the time,” Karlin said. “They need to be activated during very specific stages and then turned off when they’re done doing what they’re supposed to do.”

Activating the MMPs has been tricky, Karlin said. Some activator molecules can actually be toxic to cells.

Karlin said she intends to do some mechanical load testing on these scaffolds to see if forces placed on the scaffolds cause any changes in the number of MMPs or if they become more or less activated. She hypothesizes mechanical loading may actually prevent some of the degradation caused by the MMPs.

Born in Lewiston, Karlin grew up in Coos Bay, Oregon. She received the Uno and Vera Richter Memorial Scholarship, which is given to a Coos Bay high school student each year. That, combined with the affordability of U of I, made Idaho the perfect choice, Karlin said.

She grew up thinking she wanted to be a veterinarian, and her U of I undergraduate degree is in pre-veterinary.

“I always loved the combination of medicine and biology, and I always loved animals, so it seemed like a good way to go,” she said.

That was until she found herself on her first engineering project. With some coaxing from her dad, Karlin applied for and received a NASA’s Undergraduate Student Instrument Project grant through the Idaho Space Grant Consortium. Karlin’s team launched high-altitude balloons to the edge of Earth’s atmosphere to study human space habitability.

“I ended up loving it,” she said. “I loved the whole engineering process and the combination of different disciplines.”