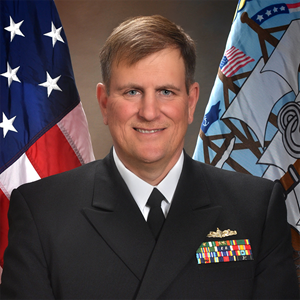 Commander Anthony Rabaiotti, a native of East Providence, Rhode Island, attended Quinnipiac University, Hamden, Connecticut, where he earned a Bachelor of Science degree in Biology (Pre-Medicine). In 1998, he completed his Doctor of Podiatric Medicine degree from Des Moines University and also completed a second Bachelor of Science degree in Biology. After completing residency at the Togus VAMC in Augusta, Maine, he worked in the civilian sector as a Podiatrist in New York City, New York. Commander Rabaiotti was commissioned in 2001 after completing Officer Candidate School in Pensacola, Florida and his initial duty station as a Commissioned Officer was as the Main Propulsion Officer (MPO1) aboard the USS Detroit (AOE-4) stationed in Earle, New Jersey. He commissioned as a line side Surface Warfare Officer due to absence of Podiatry billets at the time. He qualified as Surface Warfare Officer and Engineering Officer of the Watch (steam) aboard the USS Detroit and deployed in support of Operation Enduring Freedom. His second tour was as the Damage Control Assistant (DCA) aboard the USS Hopper (DDG-70) stationed Pearl Harbor, Hawaii. He deployed for second time in support of Operation Enduring Freedom. Completing lateral transfer in 2005, he was stationed at Naval Branch Health Clinic Naval Training Center, San Diego, CA from 2005 to 2009 as Division Officer of Podiatry. His second tour was as Orthopedics Department Head, Naval Health Clinic Annapolis, MD from 2009 to 2012. Commander Rabaiotti then completed an overseas tour as the Orthopedics Department Head and Staff Podiatrist at United States Naval Hospital Sigonella, Italy from 2013 to 2016. After returning from Europe, Commander Rabaiotti was assigned as a student to the College of Naval Warfare at the Naval War College, Newport, RI, where he earned a Master of Arts Degree in National Security and Strategic Studies and an AQD in Middle East studies. He is completed a tour as staff Podiatrist at Naval Branch Health Clinic Naval Training Center, San Diego, CA from 2017 to 2019. Currently, he is stationed in Moscow, Idaho as the Executive Officer of the NROTC programs of the University Idaho and Washington State University. Commander Rabaiotti’s military decorations include: The Navy and Marine Corps Commendation Medal (two awards), Naval and Marine Corps Achievement Medal (three awards) and various unit awards. He is a member of the American Podiatric Medical Association and is board certified by the American Board of Multiple Specialties in Podiatry. He is currently licensed to practice Podiatry in New York State.