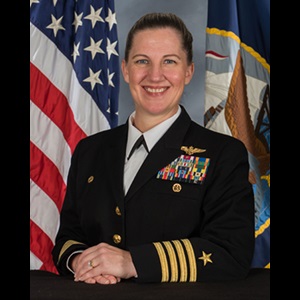 CAPT Shaun C. McAndrew, a native of Wilkes-Barre, Pennsylvania, was commissioned in 1993 from the United States Naval Academy with a Bachelor’s Degree of Science in Electrical Engineering. Completing her flight training at HT-8, she earned her designation as a Naval aviator in January 1996.

After flight school, she transferred to HSL-41 for fleet replacement pilot training. CAPT McAndrew was then assigned to HSL-43, San Diego, CA for her first fleet tour. She embarked in USS MERRILL (DD 976) and USS CURTS (FFG 38) for deployment to the Arabian Gulf and South America/RIMPAC. She completed her tour as the Assistant Operations Officer and NVG Program Manager. She transferred to Naval Support Activity (NSA), Bahrain flying UC-12M transport aircraft in May 2000.

Continuing her contributions to the Global War on Terror, she remained in Bahrain, transferring to Commander, U.S. Naval Forces, Central Command/Commander, FIFTH Fleet staff in December 2002. As a Helicopter Warfare Officer, she was responsible for the intra- and inter-service coordination of rotary wing aircraft and Personnel Recovery missions for all Navy personnel operating in the FIFTH Fleet AOR. During Operation IRAQI FREEDOM, CAPT McAndrew was the Combined Forces and Maritime Component Commander’s Rescue Coordination Center Director.

CAPT McAndrew became the liaison between the MNF-I Resource Management office and Multi-National Security Transition Command Iraq (MNSTC-I) Comptroller’s office. She assisted the MNSTC-I comptroller’s office in the coordination of the Iraq Security Force Fund, a direct multiple fiscal year Congressional Appropriation, totaling $15 billion of programming authority. The appropriated funds developed the nascent Defense and Interior Ministries and their Security Forces to stabilize Iraq. She was selected for operational command during her tour in Iraq.

Reporting to HSM-41 in October 2008, she transitioned to the MH-60R Seahawk, later assuming duties as Executive Officer. CAPT McAndrew commanded HSM-41, the west coast fleet replacement squadron, from September 2010 to December 2011. During her command tour, she assisted three squadrons complete their transition from the SH-60B to MH-60R, had more than 30 aircraft assigned, and trained over 250 pilots and aircrew. After command, she was assigned to the OPNAV Plans and Policy staff representing the Navy’s interests in Global Defense Posture. CAPT McAndrew graduated from the National War College with a Master’s Degree in National Strategic Studies. She then served as the First Battalion Officer at the United States Naval Academy where she was responsible for the professional development of 750 Midshipmen and taught Ethics and Moral Reasoning for Naval Officers. CAPT McAndrew reported to the University of Idaho NROTC Unit as Commanding Officer in July 2017.