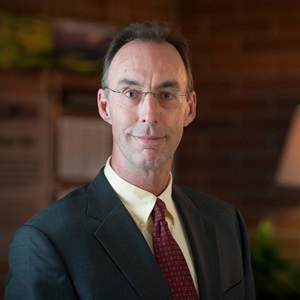 Dean Mark L. Adams received a B.A. in Art History from Williams College in Massachusetts in 1983 and a J.D. from the University of Chicago in 1988. Prior to joining the College of Law, he has served as Vice Dean, Associate Dean for Academic Affairs, and Director of International Programs at Valparaiso University School of Law, in Valparaiso, Indiana. As a professor, Adams has taught Contracts, Labor Law, Employment Law, Legal Writing, Labor Arbitration, and courses in Human Rights and Comparative Law.

As Director of International Programs, he established agreements with law schools in Latin America and Europe for student and faculty exchange, created and coordinated an LL.M program for foreign lawyers, and developed a study abroad program focusing on human rights in Chile and Argentina. He has presented lectures on legal education, labor law, and human rights topics in Egypt, Turkey, Chile, Argentina, Brazil, South Korea, Taiwan, and Germany.

Dean Adams served as the Faculty Athletics Representative at Valparaiso for many years and was appointed to the NCAA Amateurism Cabinet in 2012. He was also a Board Member for the Indiana Continuing Legal Education Foundation (ICLEF). Adams also has extensive experience as an Arbitrator in the field of labor and employment law.

Prior to becoming a law professor, Adams was an associate at the Seattle firm of Davis Wright Tremaine, practicing in the areas of labor and employment law.