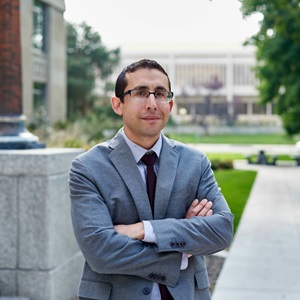 Benjamin Plener Cover studied engineering, mathematics, and economics at the University of Toronto; international development at the London School of Economics; and law at Yale. During law school, he was a submissions editor for the Yale Journal of Law and Feminism, a student director of the San Francisco Affirmative Litigation Project, and a participant in the Prisoner Legal Services Clinic. He also founded a nonprofit organization called 24 Hours for Darfur.

He has served as a Visiting Associate Professor since 2014 and a tenure-track Associate Professor since 2017. He has written about the Petition Clause and partisan gerrymandering, and his work has appeared in the Stanford Law Review and the U.C. Davis Law Review. He has served as a peer reviewer for Election Law Journal and currently serves on the executive committee of the Election Law section of the American Association of Law Schools. His article on partisan gerrymandering was recently cited by a federal three-judge panel in the case of Ohio A. Philip Randolph Inst. v. Householder, No. 1:18-CV-357, 2019 WL 1969585 (S.D. Ohio May 3, 2019).