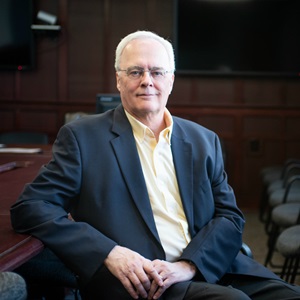 Mark Anderson joined the faculty of the College of Law in 1982. He is a 1973 graduate of Macalester College and received his law degree in 1977 from the University of Chicago. From 1977-1982 he worked at the Minneapolis-St. Paul law firm of Oppenheimer, Wolff and Donnelly. His practice included corporate finance, acquisitions, business formation, licensing of intellectual property and constitutional law. The focus of his practice was federal antitrust law in the transactional, planning and litigation settings. He spent a significant portion of his time addressing the needs of high technology clients.

For many years, Professor Anderson has taught Business Associations, Trademarks and Trade Dress, Criminal Law and Antitrust.  He has also taught Remedies. In his teaching, Professor Anderson emphasizes the application of the law in the context of high technology. Intellectual property law directly addresses incentives for the development of new technologies. Antitrust law and the generally applicable law of business associations affect how people may or must cooperate to develop, finance and disseminate changing technologies.

Professor Anderson's research interests focus on the ways in which the law encourages or discourages cooperation among people. Legal principles which affect such cooperation include fiduciary duties in the corporate and unincorporated contexts, the conspiracy element of Section 1 of the Sherman Antitrust Act, the conduct requirement of Section 2 of that same statute and the law related to the dissolution of businesses. Professor Anderson is also interested in the role of gender in the application of legal rules in the business context and society generally. He has served as a consultant on matters including antitrust, corporations, higher education assessment, trade dress/trademarks, trade secret/nondisclosure obligations, meeting facilitation and statutory reform.