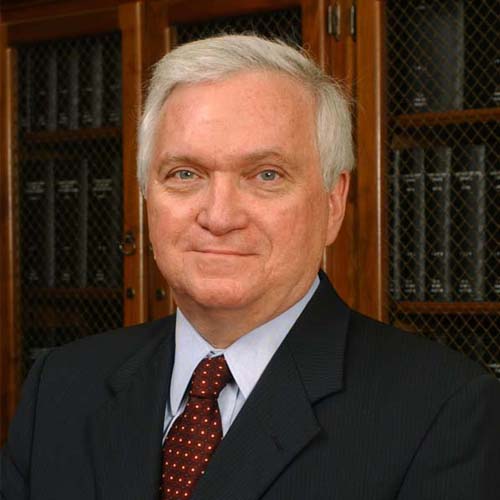 Don Burnett is professor emeritus and past dean of the University of Idaho College of Law, as well as past interim president of the University. His career has encompassed service as an appellate judge, practicing lawyer, U.S. Army JAG officer, state bar president, university administrator, law professor, and dean of two law schools.

Don’s concurrent civilian career began with service as a law clerk to the Chief Justice of the Idaho Supreme Court and as an assistant attorney general for the State of Idaho. He entered private practice in Pocatello; became president of the Idaho State Bar; chaired the Bar’s professional conduct standards committee; served as a judge of the Shoshone-Bannock Tribal Court; and was executive director of the Idaho Judicial Council. In 1982 he was appointed to the newly formed Idaho Court of Appeals; in 1986 he was retained in office by statewide election.

In 1990 Don accepted the University of Louisville’s appointment as dean of the law school now named, through efforts by Don and his colleagues, for the school’s historic benefactor: Justice Louis D. Brandeis. Don served twelve years on the Brandeis faculty, ten years as the dean. He chaired the Kentucky Bar Association’s Ethics Committee; served as convening member of the Kentucky Roundtable on the Environment and the Economy; and served on the board of directors of Health Kentucky (a nonprofit organization devoted to healthcare for the poor).

In 2002 Don returned to his native state, accepting appointment as dean of the University of Idaho College of Law. He served in that capacity for eleven years, until being named interim president of the University. During this period, the College of Law established a pro bono service program encompassing all students; added subject areas of curricular emphasis and interdisciplinary collaboration; raised the level of institutional support for faculty scholarship; enhanced the diversity of the faculty and student body; expanded the delivery of legal education in the capital city of Boise; and embarked with the Idaho Supreme Court upon development of the Idaho Law & Justice Learning Center, which commenced operation in the fall of 2015 at the refurbished, historic Ada County Courthouse adjacent to the State Capitol in Boise.

While performing administrative duties during his University of Idaho deanship, Don taught Professional Responsibility and Criminal Procedure courses, a Native American Natural Resources Law seminar, and an undergraduate Honors Program seminar. He chaired the Idaho Supreme Court’s task force on structure and resources for the state appellate courts in the next quarter-century; chaired the University of Idaho’s Ethical Guidance and Oversight Committee; served as a coordinating dean of university-wide interdisciplinary programs; and served as a founding member of the Advisory Council for Operation Education, a scholarship program for disabled veterans. He chaired the University’s Steering Committee on Diversity and Human Rights as well as the Professionalism Committee of the American Bar Association’s Section of Legal Education & Admissions to the Bar. He received the Idaho State Bar’s Distinguished Lawyer, Outstanding Service, and Professionalism awards.

As interim president of the University of Idaho, Don worked to broaden participation by staff and faculty in university decision-making, to enhance student health and safety, to advance the University’s successful $225 million capital campaign, and to build pride in the University of Idaho’s distinctive heritage. His writings and speeches often described the University as “Idaho’s national land-grant, founding, comprehensive, constitutionally established, and, therefore, flagship institution.” He emphasized collaboration with sister institutions in promoting all of post-secondary education in Idaho.

At the conclusion of his service as interim president, Don returned to the faculty of the College of Law, where he taught Professional Responsibility and Civil Procedure on the Moscow campus. In 2016 he was named Professor Emeritus of Law, and the “Senate” classroom in the Idaho Law & Justice Learning Center was named for him. In 2018 he received the faculty-bestowed Sheldon A. Vincenti Award for Exemplary Service to the College of Law. In 2019 the University of Idaho conferred the honorary Doctor of Laws degree upon him. In retirement he has continued his volunteer service to the Idaho Supreme Court’s Education Committee, the Idaho Legal History Society, and Attorneys for Civic Education. He is a regular presenter of continuing legal education, judicial education, and civic education programs emphasizing ethics, the rule of law, and the role of an independent, impartial judiciary in America’s democratic republic.