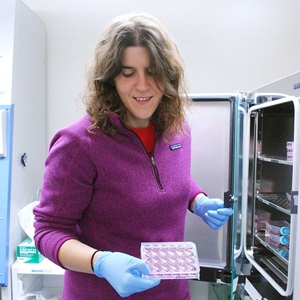 Sophia’s Hands-On Experience is Made Possible Through:
John F. Keegan Fellowship - Established in honor of John F. Keegan, the fellowship supports applied research in areas of medical technology that would benefit most from the application of engineering discipline and expertise.

Keegan, 1875-1942, supervised the installation and testing of all mechanical and electrical equipment in the Vanderbilt Hotel in New York while it was under construction and was chief engineer from its 1910 opening to his death in 1942.

Before that, he worked in the engine room of the Waldorf Astoria Hotel in New York, where he constructed a small laboratory at the hotel for famous electrical engineer Nikola Tesla.

Sophia’s Research:
Sophia Theodossiou has worked in Schiele’s lab since 2016. As the only doctoral candidate in the lab, Theodossiou works alongside each of the undergraduates to help them with their projects.

This gives Theodossiou ample opportunity for involvement in a lot of projects to better understand how tendons develop, how they’re injured and what factors impact these processes.

“Tendons don’t heal well. If you injure yours, there’s not a ton you can do. We’re trying to figure out how to come up with a replacement; It might be a real tendon, it might be an engineering material or it could be something else.”

More of the research focus this year has been on the effect of mechanical loads, or the force from movement, placed on tendons during development.

In a collaborative project with Idaho State University, the team is investigating how walking during early development may change the overall strength of tendons. A publication on their findings was published this year.

Theodossiou was born in Athens, Greece, and moved to Chicago for her undergraduate in biology and anthropology. Longing for the mountains, she applied to U of I for a master’s program in anthropology, but quickly realized that wasn’t for her and started working full-time in Moscow.

When she decided she wanted to return to school, it only took a meeting with Schiele for her to decide on biological engineering and pursing a doctorate.

“I found that I just loved the research, classes and career path,” she said. “Also, Moscow is a great town. We’re close to a lot of opportunities for outdoor recreation. There is a huge amount of diversity for how small the town is.”