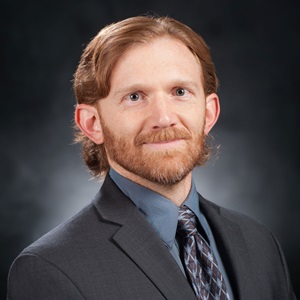 D. Eric Aston is professor of the U of I Chemical and Materials Engineering Department. Aston received his doctorate in chemical engineering from the University of Washington (2001), working concurrently on his master's in physics (2000). He began teaching thermodynamics and separation processes at U of I in 2001, including labs in distillation and electives in colloids, interfacial phenomena, surface instrumentation, bionanotechnology, polymers and honors seminars on nanoscience and creative writing. His research in polymeric, magnetic and photoactive materials, bionanomaterials, biosensors and nanomechanics has been funded by the W. M. Keck Foundation, NSF, ONR, USDA and others. His current interests wax and wane from (micro-)Raman techniques and synthesis of conducting polymer nanopowders to biology and biochemistry, creative writing, ancient history, home remodeling and raising two children with his wife. Aston also received his bachelor's degree in chemical engineering from U of I in 1995.