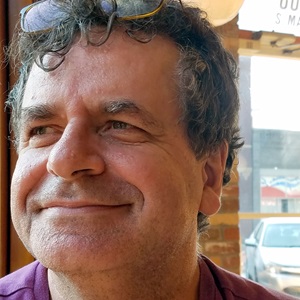 Jean-Marc is an award-winning interactive media artist. His artwork has been presented at domestic and international venues. He has written books on creating animations, the production of real-time 3D animations and games.

He is involved with research on visualisation and interaction design in virtual reality (VR) and mixed reality. He currently designs fully interactive virtual proteins. His projects include mobility and entertainment in VR and human machine interface design. He tinkers with storytelling utilizing VR, 3D photogrammetry, artificial intelligence and drones.

When Jean-Marc Gauthier is not observing - he is conceptualising and creating. He starts with sketches - be it traditional (pencil, charcoal, marker) or digital. Often his drawings turn into animations, 3D designs, 3D animations, videos and VR projects. His background as an architect and animator has taken him in directions that have crossed over many disciplines and fascinating challenges - going as far back as teaming up with a brain surgeon for interactive visualisation, his work on the visualisation of the genotypes of the world’s bird species or recreating in VR - wildlife environments of the Pacific Northwest.