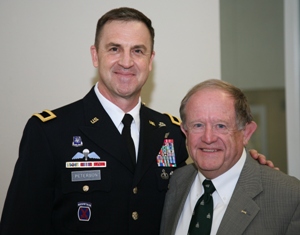 In 1983, University of Idaho sophomore Erik Peterson met Dean of Students Bruce Pitman for the first time. It didn’t seem an auspicious occasion: Peterson was in trouble for minor dormitory rule violations. However, that disciplinary event served as a turning point for the young college student and challenged him to grow in a more positive direction.

On May 10 2013, with Dr. Bruce Pitman in the audience, newly-promoted Brigadier General (BG) Peterson (1986, B.S. Geography and B.S. Cartography) stepped up to the podium as the guest speaker for the University of Idaho’s Army ROTC commissioning ceremony. It was his first official visit to the campus since graduation. (See photos on flickr from the ceremony)

Jack Peterson, the General’s father remarked, “It is only fitting to come back here to this campus. It all started here 27 years ago when we pinned him as a lieutenant. It has been truly an amazing journey come full circle.”

The general’s amazing journey actually started on the Juneau Ice Fields in Alaska where, as a high school student at a summer internship, he met renowned glaciologist and then Dean of the U of I College of Mines and Earth resources, Dr. Maynard Miller. Miller is widely accepted as the father of modern glaciology and glacial-climate research. BG Peterson described how it was his great respect for Dr. Miller that got him excited about the College of Mines and cartography and geography, which led him to U of I. During his visit, the General insisted on taking time to visit Dr. Miller, now 92 and still residing on the Palouse. 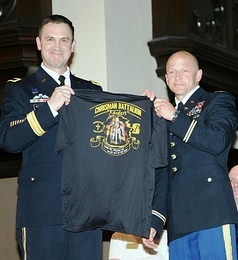 Recalling that first meeting with Dr. Pitman, BG Peterson said, “It was one of those maturation processes of college. I was so impressed with the professionalism of how Dr. Pitman and his staff handled the entire situation that I was actually inspired to make some significant changes in my life right around then.”

Dr. Pitman laughed as he was reminded of their initial meeting, “I actually forgot all about the discipline issue. I just remember that he did an excellent job for us (as an RA) addressing all the problems in dorms at nights and on the weekends. I remember he had this remarkable pattern of self discipline and integrity well beyond his age that he displayed time and time again. When he left us, he was much missed.”

As part of those changes, Peterson made contact with the Army ROTC program to explore becoming an officer. He soon fell in love with the Army ROTC Chrisman Battalion and excelled, earning the Distinguished Military Graduate, an honor reserved for the top twenty percent of cadets commissioning each year.

BG Peterson commented, “College of Mines Dean Dr. Maynard Miller and Dr. Bruce Pitman and his Student Services team and the ROTC leadership apparently recognized some potential in me. Dr. Pitman even hired me as an RA. At every turn, the great U of I faculty and the ROTC cadre challenged me with experiences that allowed me to learn about leadership and build my own confidence and abilities. The academics were great, but it was much more than that .”

After college, BG Peterson’s journey took flight. He flew helicopters, usually in Special Operations units, and commanded soldiers at every level in combat or during contingency operations all over the world. As a junior Captain, he was part of Operation Desert Shield / Desert Storm. As a lieutenant colonel, Peterson served two tours as a battalion commander in Iraq and Afghanistan. As a colonel, Peterson commanded the 10th Combat Aviation Brigade in Iraq and also served as the Chief of Staff of the 10th Mountain Division in Afghanistan. BG Peterson is now the Deputy Commanding General for the U.S. Army Cadet Command, which is responsible for all of the Army’s College ROTC and high school Junior ROTC.

As he wandered around campus on May 10, Peterson chuckled over some college memories from before that meeting with Dr. Pitman. He fondly recalled living in Gault Hall as a freshman and sophomore and moving to the Wallace Complex to work as a Resident Advisor. He recalled putting huge speakers in his dorm window and blasting music on a beautiful Palouse spring day, then playing Frisbee on the lawn in front of Gault Hall until someone complained about the music.

With the firm academic foundation that his experience at the U of I provided, BG Peterson has gone to earn a Master’s in Business Administration and Masters in National Security Strategy and Policy.

BG Peterson is married to Kristin (Powell) Peterson, a West Point graduate and former Army officer. They have two daughters Jackie and Katie.

BG Peterson’s journey continues. After his visit to campus, the Army announced he will soon be assigned to Korea as Deputy Commanding General for Support of the 2nd Infantry Division.