Coincidences and chance meetings happen to everyone. You are on vacation or in a strange place, and there sitting at the next table or standing by you on the sidewalk is a friend you haven’t seen for years – a happy odd reunion. In 2003, Army Captain Brian Gilbert and MAJ Rory Thompson (both U of I Class of 2000 alumni) had such an encounter. However, the strange place was Iraq and they were not on vacation.

Gilbert, who was serving as commander of a Bradley Infantry Fighting Vehicle company within the 3rd Infantry Division, recalls the moment.

“We were sitting in a defensive position some time right after the ground war into Baghdad when this Apache helicopter starts circling overhead. They sat down right next to my Bradley and when the pilot got out, I said, ‘Hey! I know that guy.’ He was my classmate from back at U of I, Rory Thompson.”

MAJ Thompson (now with the Idaho Army National Guard) remembered it as well.

“I was flying an AH64A (Apache Attack Helicopter) as the air mission commander for a team of two aircraft conducting a link-up with a ground unit in Iraq. We landed near a company of Bradley Fighting Vehicles to get a situation picture of the battlefield. I climbed out and 20 feet or so in front of me was Captain Gilbert. It was a chance meeting that was a surprise to both of us. I spent 20 months in Iraq and I think that was one of the few times I encountered anyone from my U of I ROTC Class.”

There have been many unexpected encounters with fellow Vandal alumni all over the world due to the Global War On Terror. Many have found the person next to them in the chow line was an upperclassmen and fellow cadet or found a fraternity brother in the barber’s chair as they walked in to get a haircut at FOB Speicher or in Kuwait.

When MAJ Tanya (Vittetoe) Schilling (‘96) reported to the US Army’s Command and General Staff College at Ft. Leavenworth, she was surprised when several younger majors in her class recognized her. They explained they knew her from the university’s Army ROTC battalion. They were freshman and she was finishing her degree in elementary education. MAJ Schilling, who never met or served with another Vandal in all her years in the Army, soon found herself surrounded by eight other Chrisman Raiders, who had graduated from 1996-2001.

Not relying on accidental reunions, Schilling recently organized a group of Idaho alumni to swap stories and share their experiences – and one topic they all discussed was September 11, 2001 and how it changed their lives and the military.

"The whole mindset of the entire post changed overnight from, ‘OK, let’s go out and have some fun with helicopters,’ to ‘what do I have to do to get ready for combat?’ For a lot of guys it was a very sobering moment, because they were months away from going out to their first units and then the realization set in that they were going to combat as their first assignment in the Army.”
- MAJ Justin Hopkins | Class of 2000 (photo right)

MAJ Kelley Boian (‘00), who was at the Jungle Readiness Training Center in Ft. Polk, Louisiana, recalled, “They froze all the training when it happened. One of the guys happened to have a field television with him, so we saw the video that morning ... There was a lot of immediate knee jerk reaction such as tightening up guard duty in barracks and such. They immediately started swapping out the old training at the training center to match this new threat, but it took a couple of years.”

“Normally, division staffs are very slow to make changes and aren’t known to turn on a dime. After 9/11, the staff really jelled together like never before. We were forced to fine tune all the communications equipment and operations within the division in a very short period of time. It was really amazing to see the cohesiveness.”

As a new captain in the 11th Air Cavalry Regiment, MAJ Rob Hafen (‘96), who was at the National Training Center in Ft. Irwin, California explained, “The changes towards more modern combat were already in the planning stages, but now there was a lot of pressure to bring them about much faster. We were now incorporating counter insurgency, civilians on the battlefield and stabilization operations in the training of units that would rotate through the training center. Everything transformed more intensely, but we were relying on the lessons learned coming out of Iraq.”

MAJ Monte Koontz (‘01) was commissioned as a brand new officer just four months prior to September 11th, and was at his Officer Basic Course that morning.

“We were still going under the old Krasnovian doctrine (how the US Army would fight a conventional Soviet-style army). . . When I came back to the officer advance course for captains in 2005, only the basic course for new lieutenants had just been changed to the new counter insurgency doctrine. The advance course still hadn’t been changed and we couldn’t even understand the vocabulary and terminology that the brand new lieutenants were being taught and were now using.”

Ironically, Schilling and Hafen - both U of I education majors, later worked at Ft. Leavenworth, Kansas writing the new official Counter Insurgency Doctrine, which was published in 2007 and based on the lessons learned in Iraq and Afghanistan. 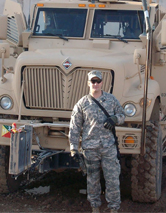 “You run across a lot of people from other ROTC program or the Military Academy and I always felt that we were very well taught as we went out into the force. We were provided a very good base at the University of Idaho and the Chrisman Battalion.”
- MAJ Kelley Boian | Plant Sciences, Management Option (photo right)

As the conversation turned to their alma mater, the group unanimously agreed that regardless of degree program the education they received at the University of Idaho left them better prepared than many of their peers who commissioned out of other institutions.

“I have always joked about how my child psychology classes helped me considerably in dealing with soldiers and my fellow officers. But really, the methodology of teaching really helped me with how to teach different people and how to interact with and motivate them,” said Schilling (Education).

Gilbert (Criminal Justice) agreed, “The sociology classes helped me understand people and understand how to be a leader and what motivates different people. When I was deployed in Iraq, we were doing a lot of community policing and learning how the communities operated over there. The education in Criminology helped me to understand that whole operation.”

“I can earnestly say that being a civil engineer really made me a better Artillery officer,” said MAJ Eric Roth (Civil Engineering). “To understand all the science behind artillery and the math behind trajectory of artillery gave me a huge leg up. I wasn’t a very good engineer student at the U of I, because I was focused on becoming an officer, but I still passed the Engineer in Training Exam on the first try, when typically 70% have to retake that exam. When I went into my functional area (for career advancement) as a captain, I was chosen for the Operational Research Analysis with Military Applications Course or ORSAMAC. That four-month course starts with all your college level calculus and differential equations compressed into the first three weeks and I passed the mandatory exam the first time when most failed it. This really helped me advance my career.”

MAJ Justin Hopkins (Human Resources) added, “The School of Business there was really good about pushing us to think outside the box in analyzing a problem and coming up with solutions. I think back to capstone course in the business school and being given a problem to look at and not to go with the first answer because you need to continuously look for more possible solutions out there. This is key to the way the Army operates.”

"ROTC training at the U of I was better, because the training we could do in an environment like U of I, where the community was so supportive and where we had such access to the woods and away from the big city. We had the opportunity to practice our field craft and leadership much more. I don’t think you can do that in the city, we were very lucky for that.” - MAJ Brian Gilbert (photo left)

Finally, as the reunion wrapped up, they were all emphatic that the U of I Army ROTC cadre (active duty instructors) and training helped give them an advantage over peers as cadets and Army officers.

“The communications skill sets from the Chrisman Battalion were the best. I knew lieutenants from other schools that could barely formulate a sentence. Our training at the Chrisman battalion was top notch,” said MAJ Darren Hasse (Geology – ‘99)

He further explained, “Lieutenants are notorious at not being able to brief senior leaders. They simply haven’t done it or they aren’t comfortable with it. They don’t write well, they don’t brief well, they don’t speak well. We got all that at U of I and the Chrisman Battalion. The written orders and the briefings of orders we did really prepared us.”

MAJ Hopkins agreed and closed by summing up how the group felt, “We all benefited from the ROTC program and the ROTC program benefited from a really good set of cadre. They did one of the better jobs of getting the most out of college students and cadets I’ve ever seen. From Tanya in 1991 to Andy in 2001 there was a stretch of about ten years there where we had an excellent set of cadets that were a direct reflection of the excellent set of cadre there. When we went to Advance Camp and external events outside our battalion, we always looked good because of the time put in by the cadre. Even today when we run into our peers from the University of Idaho we see the same thing.”

ABOUT THE CHRISMAN BATTALION
The Chrisman Battalion is named in honor of Brigadier General E. R. Chrisman who was the battalion’s first professor of military science. The battalion has been at the University of Idaho since it’s opening in 1892. From 1991 to 2001, the time period leading up to the Global War On Terror, the battalion commissioned 103 second lieutenants into the Army. Records indicate just under 2,000 lieutenants have been commissioned into the Army in the 120-year history of the Chrisman Battalion.