Stress as a Breeding Tool

New University of Idaho research raises the possibility that exposing a crop cultivar to several generations of heavy weed pressure may be an effective way to breed more resilient varieties.

Albert Kwarteng, a doctoral student in the Department of Plant Sciences who is leading the study for his dissertation, and his advisor, UI Extension weed scientist Albert Adjesiwor, have been saving and replanting repeated generations of spring wheat seed derived from parent plants raised in a weedy environment.

Spring wheat plants in the experiment have adapted to the stress over time. The researchers anticipate the project will clarify some mechanisms plants use to cope with stress from weeds, thereby helping wheat breeders.

“In the insect world if you expose plants to pests, subsequent generations are more tolerant to pests,” Adjesiwor said. “This has been done in the entomology world for a while now. For weed science, we don’t know what happens to the progeny if you expose wheat or dry beans or sugar beets to weeds for multiple generations.”

Improved performance they’ve already noticed could be the result of a gene related to weed competition or a hormone produced by the wheat plants to aid in their self-defense. It’s most likely, however, that the response is an epigenetic mechanism, meaning that over time and after generations of exposure to a common stressor, plants and animals can develop a “stress memory” to help themselves cope that isn’t recorded in their DNA.

“We are saving the seed to know at what point are we seeing some of these changes,” Adjesiwor said.

Kwarteng has been conducting his experiment in a greenhouse setting to prevent external environmental factors from skewing the data. He started the research in 2021, planting spring wheat in pots. Some pots were surrounded by kochia, which is a highly competitive annual broadleaf weed. Other control pots contained only spring wheat, with roughly the same density of plants in the wheat-only pots as in the pots with kochia surrounding wheat.

Kwarteng replicated the trial over four generations by saving and replanting the prior generations’ seed. He plans to repeat the process once more, planting seed from every generation, along with a fifth generation of seed, to ensure consistent results.

Plant health suffered in the first two generations of spring wheat under the kochia pressure. Wheat plants yielded just one or two heads. The plants began to turn a corner by generation three, however, yielding three or four heads each, and they were averaging about five heads each by the fourth generation.

In late 2022, after finishing with his fifth generation of trials, Kwarteng hopes to analyze his wheat plants in a laboratory to determine if the changes were epigenetic, the result of a specific gene or caused by a plant hormone. He’s now applying for grant funding toward that analysis.

Kwarteng has also evaluated wheat plants under pressure from another weed, Italian ryegrass. Wheat plant health has steadily declined with each subsequent generation of planting in the ryegrass trials. Kwarteng hypothesizes the root structures of ryegrass and wheat may be too similar for the wheat plants to differentiate via an epigenetic response.

Kwarteng and Adjesiwor are in the first generation of additional trials assessing how canola responds to pressure from kochia and Italian ryegrass. 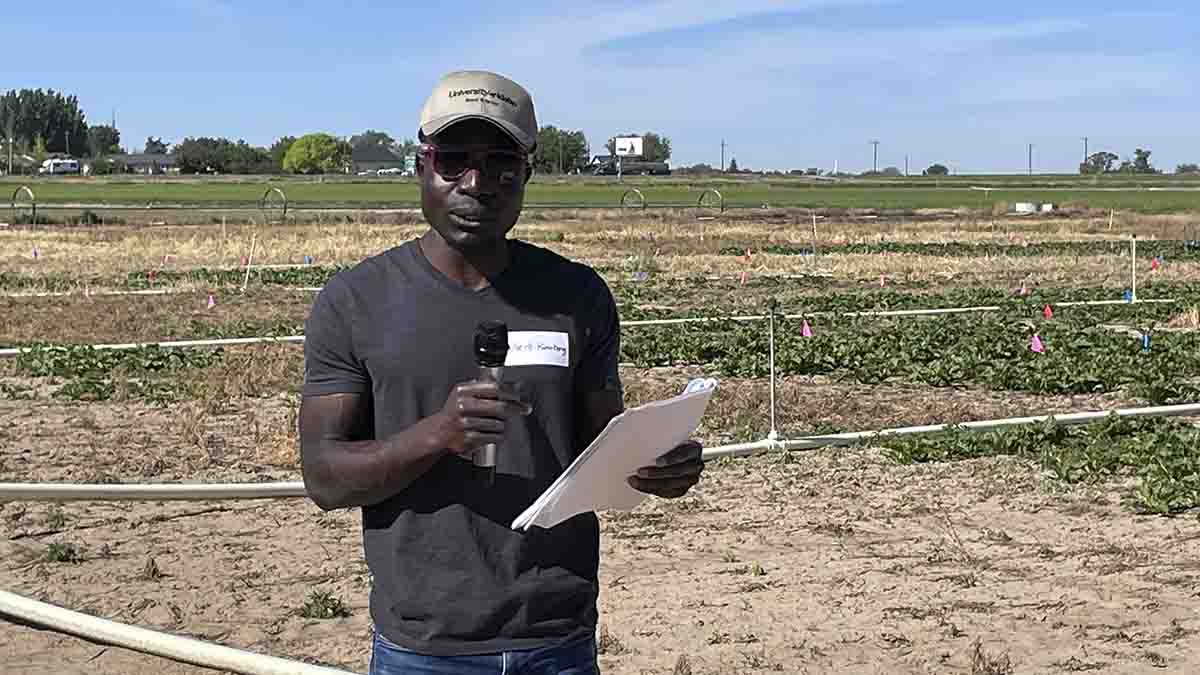