Lee Ostrom, Ph.D., was born in Coeur d’Alene, Idaho and began working at various jobs mowing lawns and weeding gardens at the age of 10. When he was 16, he began working for Inland Marine on Lake Coeur d’Alene pumping gas for boats and working in the warehouse operations. He continued to work for the company for five years. He attended North Idaho College for two years, then transferred to University of Idaho where he earned a bachelor's in Bacteriology in 1979. His goal was to become a safety and health professional and entered into a master's degree program at Texas Tech University (TTU) in Lubbock, Texas in the winter of 1980. He finished the degree in one year and was hired by PPG, Inc. in LaPorte, Texas in the winter of 1981. This particular plant made some very hazardous materials. It produced phosgene and chloroformates that are chemicals used as chemical intermediates for manufacturing food additives and pharmaceuticals.

While at PPG, Ostrom was a safety coordinator and safety engineer as well as the fire chief for the plant. Though the plant had high physical and chemical hazards, most of injuries were related to the ergonomics of the facility. In the summer of 1985, he went back to TTU to begin working on a doctorate in Industrial Engineering, specializing in ergonomics. In June of 1989, he began working at the Idaho National Engineering Laboratory (INEL, now Idaho National Laboratory or INL) in the human factors group. While at the INEL, he was on investigation teams examining medical misadministrations of radionuclides, nuclear power plant (NPP) accidents and the usability of NPP emergency operating procedures (EOPs). He also co-wrote an EOP writer’s guide for the Advanced Test Reactor, served as INEL’s director of ergonomics and conducted hundreds of ergonomic assessments. He performed risk assessment support for analyses of advanced NPPs, an upgrade of an NPP control systems and aviation inspection and maintenance tasks. He worked with a team to develop a safety culture survey tool and was lead author on a landmark paper on safety culture surveys that has been cited over 300 times.

Since the fall of 1989, he has taught classes for U of I and started full time in the winter of 2000. At U of I he continued to do research in the areas of risk assessment, human factors and ergonomics. He has taught over 20 different courses, mentored 10 doctoral students, over 50 master's students and several education specialists. He was the past director of the Industrial Technology B.S. program, an associate dean in the College of Engineering and was interim Center Executive Officer from August 2018 until June 2019. He became the permanent CEO on July 1, 2019. He has authored/co-authored four textbooks. The most recent was a second edition of his and Cheryl Wilhelmsen’s textbook on Risk Assessment that released in July 2019. He has published numerous referred journal and conference proceedings and is a frequent invited speaker on safety related topics. He is a certified safety professional, a certified professional ergonomist, a certified technology manager, a certified fire inspector level one and a certified fire plan examiner. He is happily married to his wife Lidiia, has four children, three of whom are U of I graduates and one grandson. He likes to garden, forage for berries and mushrooms, search for gem stones, fish and woodwork. 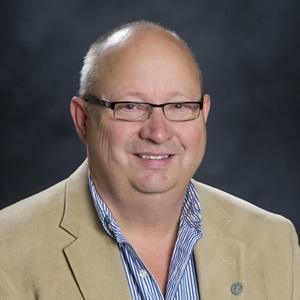