Tuskless Elephant Phenomenon Explained by U of I Scientist and Colleagues

MOSCOW, Idaho — Oct. 22, 2021 — Female elephants in a region of Africa are slowly evolving without tusks due in part to black market poaching and the ravages of a civil war, according to research by University of Idaho’s Ryan Long, an associate professor of wildlife sciences, and his colleagues at Princeton University, ElephantVoices and Gorongosa National Park.

Long is among a group of scientists investigating why elephants in certain regions of Africa wracked by heavy poaching lacked their iconic white tusks, which are prized in the multibillion-dollar wildlife black market.

Until now, there was no direct genetic evidence indicating how this was happening or why this trait was occurring exclusively in female elephants.

In a paper published this week in Science titled “Ivory poaching and the rapid evolution of tusklessness in African elephants,” Long and his colleagues implicate two genes associated with mammal tooth development to be at the center of the tuskless elephant phenomenon. One of these genes is connected to the X chromosome and is lethal to males.

“We evaluated the impacts of intense ivory poaching during the Mozambican Civil War on the evolution of African elephants,” Long said. “We found that the frequency of tusklessness among adult females after the war was significantly higher than before the war and was much greater than expected in the absence of selection for tusklessness, suggesting an evolutionary response to poaching.”

Elephants are an iconic species important to the savanna ecosystem, said Princeton researcher Shane C. Campbell-Staton. With the latest research, scientists have a better understanding of how human activity is impacting the species.

Researchers had a hunch that the tuskless phenotype was passed down in the X chromosome. To confirm their suspicions, they had to collect survey data and blood samples from elephants in the Gorongosa National Park in Mozambique.

African bush elephants are considered Earth’s largest terrestrial land animal with a height reaching 13 feet at the shoulder, distinguishing it from its smaller cousins, the African forest and Asian elephants. Its tusks can measure up to 6 feet long and weigh 50 pounds each, with the tusks of some male elephants so large that they drag on the ground.

From 1977 to 1992, the Mozambican Civil War ravaged the park with opposing combatants poaching elephants for ivory and meat. The conflict brought about a rapid decline in the elephant population, from over 2,500 to around 200 after the war. Along with this steep decline, there was an increase in tuskless female elephants, from 18.5% to 50.9%. Male tuskless elephants have not been seen in the park, but there have been rare anecdotal sightings of them elsewhere.

Because tusks are a defining feature of elephants, used for a variety of behaviors, including digging for water and stripping bark from trees, how the elephants adapt without them, and how that affects the ecosystem, is still unresolved, Long said.

“We’re hoping to unravel that mystery as we continue working on this project,” Long said. “Some of our preliminary data suggest that tuskless elephants consume different diets than their tusked counterparts. Because elephants are a keystone species, changes in what they eat can affect the entire landscape, so a high rate of tusklessness in an elephant population could very well have ecosystem-wide consequences.” 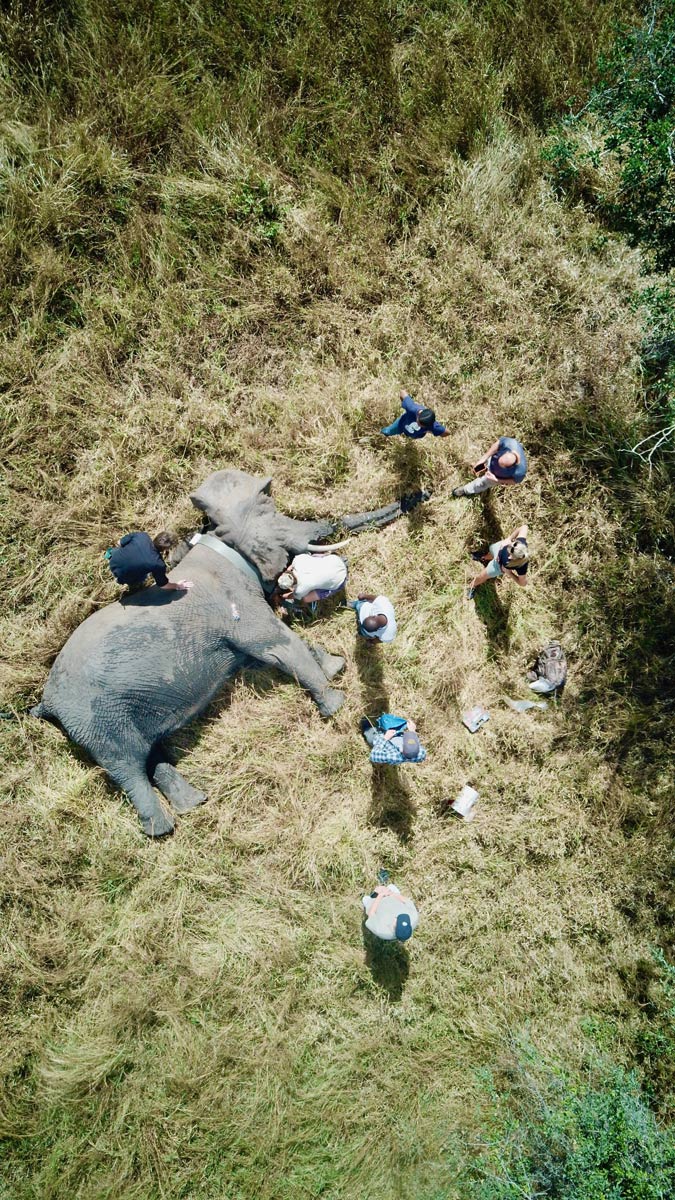 The team of researchers take measurements and samples from a tranquilized tusked elephant in Gorongosa National Park. Credit: Shane Campbell-Staton.