A Student of War and Peace 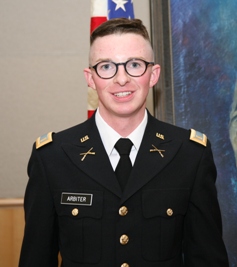 When Second Lieutenant (2LT) Connor Arbiter reports to the US Army Infantry School in June to study the art and science of war, he’ll already be a scholar on the subject of ‘War and Peace.’  Arbiter’s Master’s thesis in Political Science focused on the reasons why newly democratizing countries, involved in an international crisis, choose peaceful conflict resolution or go to war.  Arbiter successfully defended the thesis on May 6, and was commissioned an Army officer four days later.
Arbiter’s academic advisor, Dr. Lisa Carlson, stated, “I can say without hesitation that Arbiter’s thesis is among the best theses I have read over the course of the last ten years.  With further development, the research in this thesis will make a contribution to our understanding of the causes of war and the conditions for peace.”

Arbiter blended various theoretical ideas to develop his main argument that three fundamental attributes – respect for civil liberties and human rights, the rule of law, and enlarging the winning coalition that maintains a leader’s power – will  constrain leaders to find peaceful means to resolve conflict or a crisis with other countries. He concluded that, because these attributes could be found in any type of government, democracy in itself does not lead to peaceful resolve between countries.  Instead, if these three attributes are valued by two governments, this will more likely to constrain their leaders to find peaceful solutions to disputes.

2LT Arbiter also excelled as an Army cadet.  He was ranked as the 86th highest rated cadet out of 5579 cadets from across the United States last year.  He received an overall “Excellent” rating in a four week assessment camp at Fort Lewis in the summer of 2012.  In the fall 2012 semester, Arbiter juggled work on his thesis with the time-demanding job of being the Cadet Battalion Commander of the Chrisman Battalion. 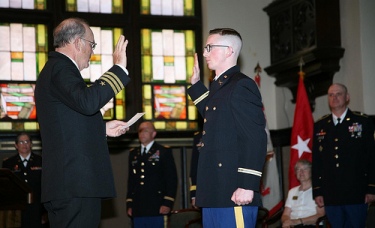 Arbiter attributed his success in two demanding worlds – graduate studies and ROTC – to having quality professors and ROTC cadre.  He noted, “Undergraduate work is, ‘here are the theories you need to be aware of and know all about.’ Graduate studies is taking apart the theories and figuring out how they relate to a bunch of other theories and then coming up with my own theories.”  Luckily, he said, “I had good people to depend on for professors.  I spent a whole lot of time locked up in a room studying and a lot of time in the library.”

Arbiter commented on combining ROTC and graduate school, “You have to be careful about what you say all the time, especially when you’re in uniform. Once they see you in uniform, your opinions and ideas are representing the Army, whether you like it or not. You have to be very careful about what you express and how you state it, especially on days when you’re in uniform. Make sure it’s all about being student. Don’t give them any reason to dislike you. Be extra prepared.”

That’s undoubtedly just how 2LT Arbiter’s instructors will find him in June:  extra prepared for ready to lead in his career in the ‘Profession of War.