U of I Researcher, Team Selected by NASA for Launch of Robot Copter to Saturn Moon

MOSCOW, Idaho — June 27, 2019 — A project to launch a robotic rotorcraft lander to Saturn’s moon Titan, envisioned by a University of Idaho researcher, has been selected by NASA for launch.

The mission, known as Dragonfly, involves 35 scientists from around the globe and is funded for up to $850 million. It is led by the Johns Hopkins Applied Physics Laboratory and beat 11 other teams to  win NASA’s New Frontiers Program competition.

“NASA’s missions of planetary exploration are one of the coolest things that we humans do as a species,” said U of I Associate Professor Jason Barnes, a founding member and deputy principal investigator of the Dragonfly project.  “To have our idea be selected to actually fly is what every planetary scientist dreams about.”

Named for its insect shape, Dragonfly is set to launch in 2025 and arrive at Titan in December 2034. Its primary mission will last a little over two years. With eight rotors, the dual-quadcopter will be able to fly from site to site on the alien moon, potentially traveling up to 10s of kilometers at a time.

Titan joins Venus, Earth and Mars as the only places in the solar system with substantive atmospheres and solid surfaces. The moon’s dense atmosphere and low gravity actually make flying easier than it is on Earth. Scientists have learned through the 2004 Cassini mission that Titan likely has:

Researchers believe liquid water could periodically come in contact with hydrocarbons at the surface, creating a concoction similar to the primordial soup that led to life on Earth. By studying Titan’s chemistry with Dragonfly, researchers may be able to answer questions about how the building blocks of life initially formed on Earth.

Throughout its mission, the quadcopter will be able to sample and analyze the icy crust, the hydrocarbon sands and the atmosphere; take meteorological measurements; photograph the landscape; and record any seismic activity.

Sending a quadcopter to a distant moon is a daring idea, Barnes said, but he thinks the design will allow researchers to answer questions that would be difficult for a stationary probe or a rolling rover. Flying increases Dragonfly’s mobility, allowing the team to efficiently sample a diverse set of locations.

“Complex organic molecules like those that formed life on Earth 4 billion years ago abound at Titan,” Barnes said. “Dragonfly will determine just how far Titan’s organics have come on the path toward life. And, if some primitive form of molecular life has been able to form under Titan conditions, then we think that we can discover it by the end of our mission in 2037.”

Dragonfly is the fourth winner of the New Frontiers Program. Past winners include New Horizons’ exploration of Pluto, its moons and the Kuiper Belt; the Juno investigation of Jupiter;  and  OSIRIS-REx, which will sample an asteroid.

More information on the Dragonfly mission and U of I’s research in space is available at uidaho.edu/dragonfly.

Media note:   Images associated with Dragonfly are attached to this email.

The Dragonfly project will be led by the Johns Hopkins University Applied Physics Laboratory and is funded by NASA in the amount of up to $850 million. The project is 100 percent federally funded. 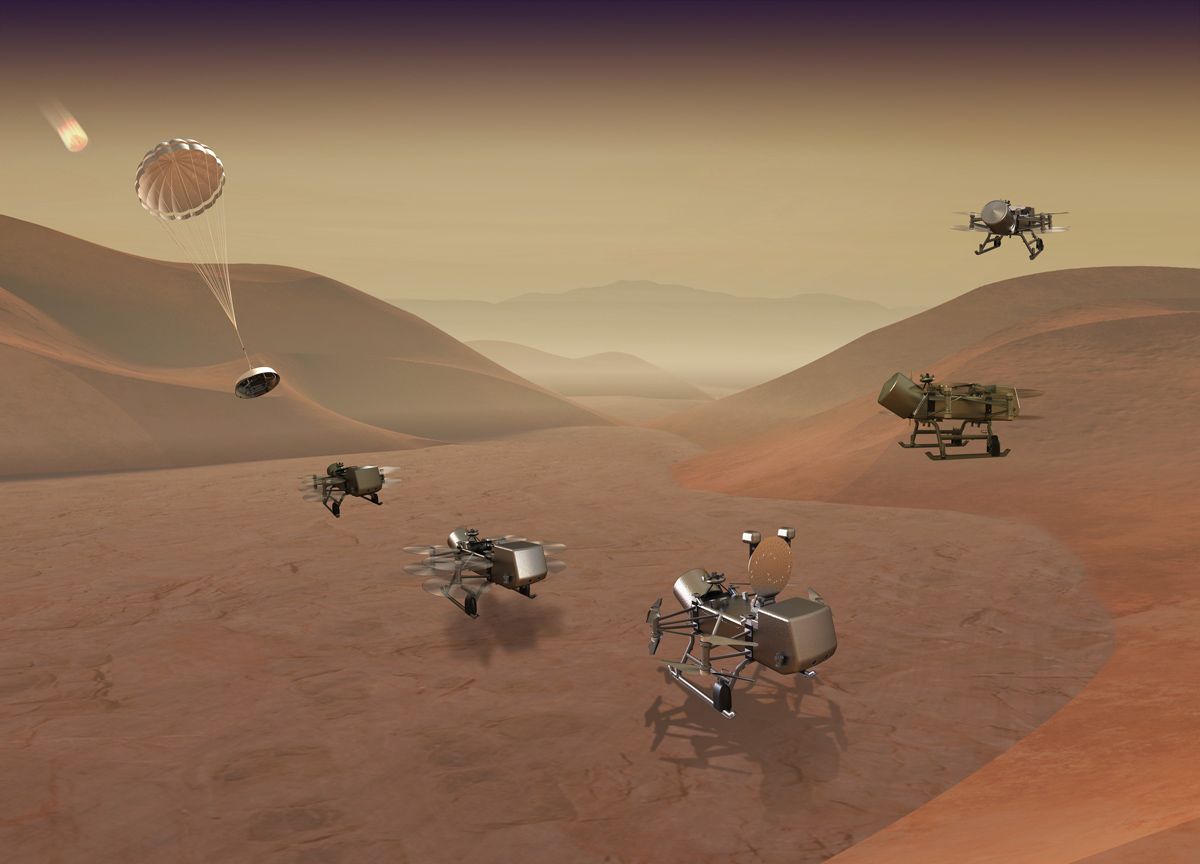 The University of Idaho, home of the Vandals, is Idaho’s land-grant, national research university. From its residential campus in Moscow, U of I serves the state of Idaho through educational centers in Boise, Coeur d’Alene and Idaho Falls, nine research and Extension centers, plus Extension offices in 42 counties. Home to nearly 12,000 students statewide, U of I is a leader in student-centered learning and excels at interdisciplinary research, service to businesses and communities, and in advancing diversity, citizenship and global outreach. U of I competes in the Big Sky Conference. Learn more at uidaho.edu