MOSCOW, Idaho — June 3, 2019 — Wildfires spew smoke and harm overall air quality, but they contribute a lot less carbon dioxide to the atmosphere than many people assume — and that many scientific models predict — according to a University of Idaho study.

Many regional estimates of wildfire carbon emissions are 59 to 83 percent higher than emissions based on field observations, according to the study led by U of I doctoral student Jeff Stenzel. The study, “ Fixing a Snag in Carbon Emissions Estimates from Wildfires,” was published late last week in the journal Global Change Biology.

Stenzel started this research after hearing media reports about wildfires that “burned forests to the ground.” He said such statements contradict observational data showing that less than 5 percent of tree biomass is typically consumed in a forest fire. Many trees are left behind, and even the dead trees, or “snags,” mean that a substantial amount of carbon has not been released into the atmosphere.

“Tree mortality does not equal carbon emissions. All that dead wood is still there,” said Stenzel, the study’s lead author. “I have heard news reports saying that a fire left a ‘moonscape’ behind. That really discounts the carbon storage capacity of forests because they do continue to store carbon afterwards.”

Stenzel and his colleagues used field data from past fires to create more realistic estimates of carbon dioxide emitted from wildfires, including the 2002 Biscuit Fire in southern Oregon and the 2013 Rim Fire in the Yosemite area of California, which is one of the largest pre- and post-fire data sets available. Authors of the study include researchers from U of I, Colorado State University, Utah State University, Oregon State University, Washington State University and the University of Montana.

The researchers found wildfires have released 5 percent of all fossil fuel emissions in the past 15 years across the Western United States. By comparison, the transportation sector contributes a much greater percentage: 44 percent.

“Wildfire can be tragic for humans when it threatens our communities, but it’s a natural part of the forested landscape,” said Tara Hudiburg, associate professor at U of I’s College of Natural Resources and an author on the study. “Fire doesn’t turn mature forests into this catastrophic, Mordor-like deathscape. In a lot of cases, it is making ecosystems more resilient to future disturbances.”

Overestimating wildfire’s carbon emissions can have a substantial impact, Hudiburg said, since some state governments use these estimates to inform land management decisions intended to mitigate climate change.

Stenzel and Hudiburg hope their research will help inform policy and the public discourse around wildfire.

“It's all about having a rational discussion about these extreme events that are easy to be talked about in dramatic ways,” Stenzel said.

Both of the attached photos show a significant number of snags left behind after fires:

Sara Zaske
Marketing and Communications Manger
U of I College of Natural Resources
208-885-2737
saraz@uidaho.edu 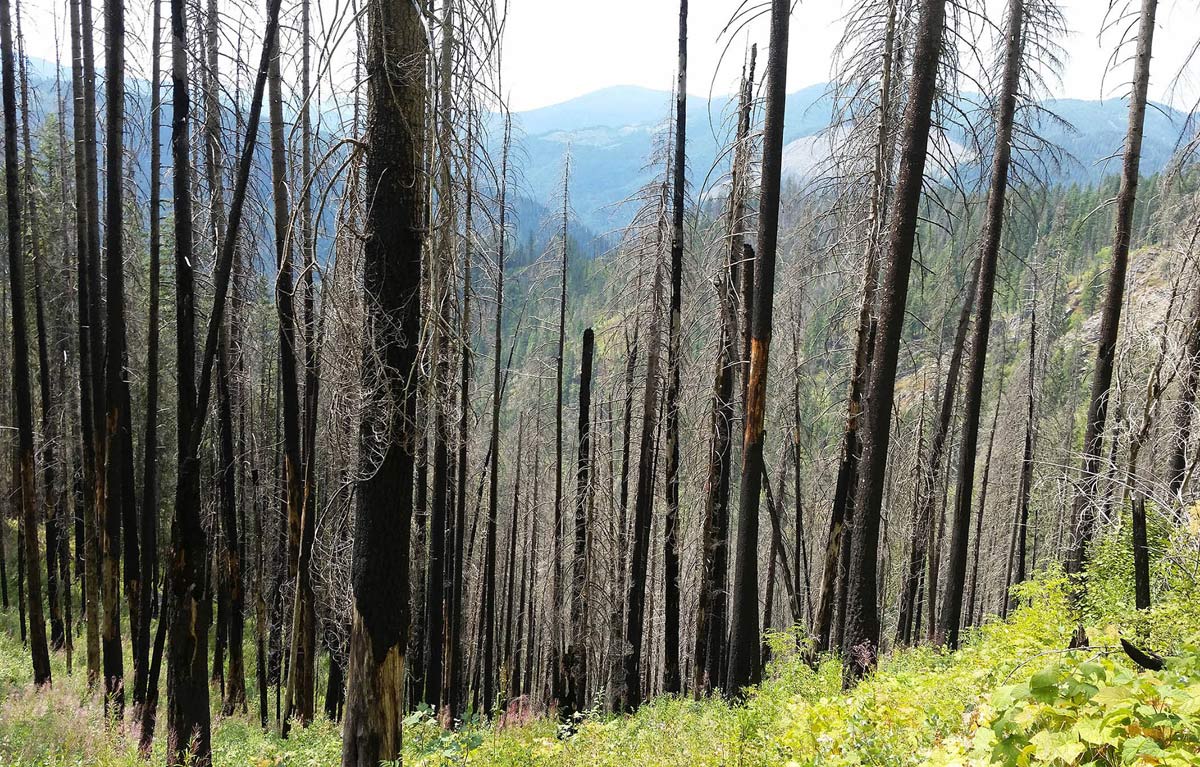