MOSCOW, Idaho — Aug. 8, 2019 — Consecutive low snow years may become six times more common across the Western United States over the latter half of this century, according to a study led by the University of Idaho, leading to ecological and economic challenges such as expanded fire seasons and poor snow conditions at ski resorts.

The study was published today in the journal Geophysical Research Letters.

“Across the West, we’re generally losing a lot of our snowpack – in many places, low snow conditions will be increasingly consistent from year to year,” said Adrienne Marshall, a postdoctoral researcher in U of I’s College of Natural Resources and lead author of the study. “Every time we have a snow drought, we’re delving into our water resources and the ecosystem’s resources. We’re drawing down on our savings without restocking the bank.”

U of I climatologist John Abatzoglou and hydrologist Timothy Link, along with University of California Berkeley’s Christopher Tennant, co-authored the paper.

Previous research shows warming temperatures linked to climate change will generally reduce snowpack and lead to earlier snowmelt in the Western U.S., but the year-to-year variability of snowpack had not been well established. The team analyzed projected changes in the year-to-year variability of peak snowpack and the timing of peak snowpack using historical conditions from 1970-99 and projected snowpack for 2050-79 under a high-carbon emissions future climate scenario adopted by the Intergovernmental Panel on Climate Change. In this scenario, emissions rise throughout the 21st century.

For 2050-79, the average frequency of consecutive snow droughts – years with low snowpack – rose from 6.6% to 42.2% across Western mountains. The authors defined snow drought as low snowpack conditions that historically occurred 1 out of every 4 years. These changes were greatest in Sierra Nevada and Cascades and the lower elevations of the northern Rockies.

“Throughout the Inland Northwest including northern and central Idaho, we expect to see a real increase in consecutive snow droughts,” Marshall said. “The droughts will likely occur in the lower elevation ranges that historically received a decent amount of snow that is now falling as rain.”

The study also projects year-to-year variability of peak snowpack across the West will decrease, mostly in areas transitioning from snow- to rain-dominated precipitation. In addition, the timing of yearly peak snowpack is predicted to occur earlier and across a broader range of months. Snowpack historically peaked in April but 2050-79 projections predict more peak snowpacks in March or earlier.

The researchers suggest ski resorts will need to prepare for both consistently lower snowpack and more inconsistent timing of peak snowpack, and low elevation ski resorts should expect an increase in snow drought. According to the paper, reservoir managers will need to develop adaptation strategies to account for increases in snow drought and earlier, more inconsistent timing of snowmelt on top of the usual pre-scheduled water releases.

The authors also suggest a consistent decrease in maximum snowpack may negatively impact threatened wildlife, such as the wolverine; vegetation, including tree establishment and summer water stress; and fire activity.

Media note: Animage associated with the study’s findings is attached to this email.

Image caption: A map of the Western United States shows the projected change in frequency of consecutive snow droughts between 1970-99 and 2050-79 under a high carbon emissions future climate scenario. Image by Adrienne Marshall/University of Idaho. 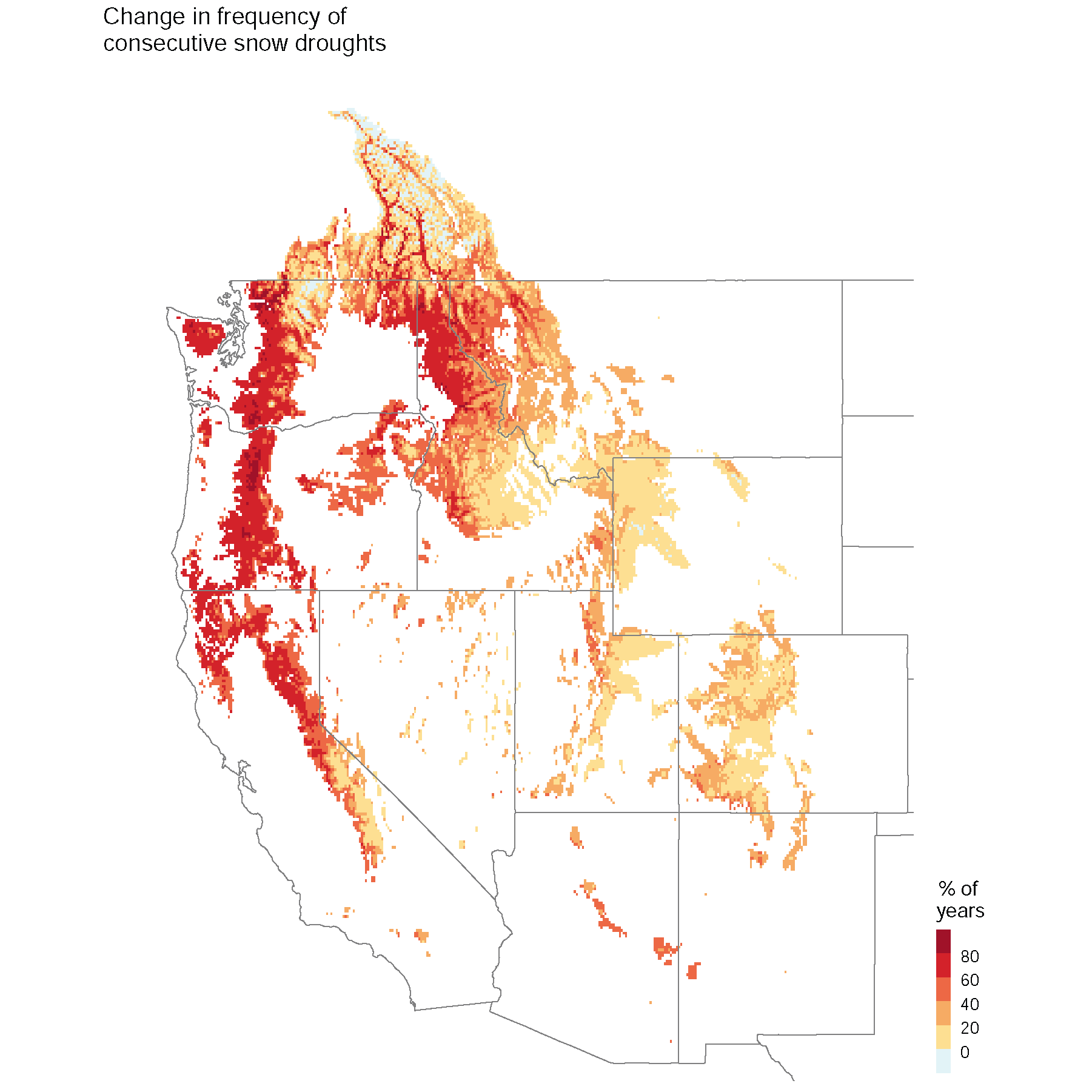 A map of the Western United States shows the projected change in frequency of consecutive snow droughts between 1970-99 and 2050-79 under a high carbon emissions future climate scenario. Image by Adrienne Marshall/University of Idaho