Researchers from the University of Idaho’s College of Natural Resources (CNR) have developed a map that shows the likelihood of clear viewing of the solar eclipse on Aug. 21, 2017. This map documents the probability of clear sky based upon location and was developed using 16 years of daily satellite observations from the MODIS sensor onboard the Terra Satellite, which is operated by NASA.

Luigi Boschetti is an associate professor of remote sensing in the department of Natural Resources and Society and Andrea Melchiorre is a doctoral student in CNR who is funded by a NASA Earth System Science Fellowship to assess the impact of clouds on global fire mapping capabilities from satellite. The two adapted methods and the programming code that was developed for Melchiorre’s doctoral dissertation to generate the clear sky probability map.

“There have been many maps created to document the path of the eclipse through the United States and the world,” Boschetti said. “This map is unique because we have added information on the probability of clear skies — meaning how well you will actually be able to see the eclipse from where you are located in the U.S.”

The map shows that viewing conditions in the western U.S. will generally be very good, but will decline as the eclipse path heads east. The map composition was built using publicly available data sources. More information regarding the data sources, a high resolution version of the attached map and Google Earth interactive map versions are available at uidaho.edu/solareclipse. 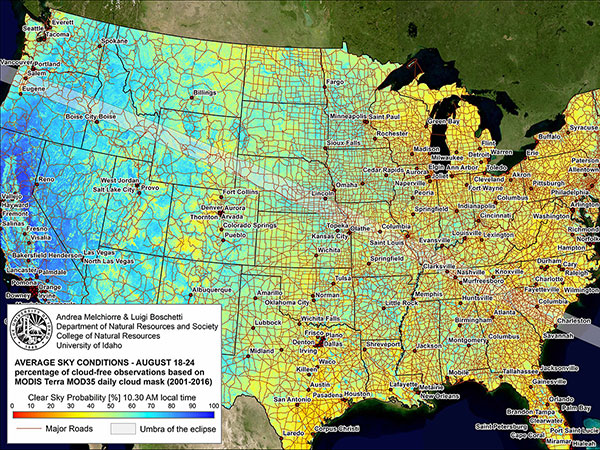 A map showing the likelihood of clear skies for the 2017 eclipse.