This story written by Scott Jackson was published in the Moscow-Pullman Daily News on April 4.

With the help of much younger, somewhat smaller scientists, a team of University of Idaho seniors studying chemical engineering have designed an experiment that will be delivered to the International Space Station next year.

The experiment will explore the comparative effectiveness of bacteria-resistant polymers in a microgravity — or weightless — environment.

Simplified, the team is trying to identify what polymers, or materials, are better able to keep bacteria from growing in space.

It’s one of five experiments included in NASA’s SPOCS program, which stands for Student Payload Opportunity with Citizen Science.

The program focuses on producing real science in collaboration with citizen scientists. On Wednesday, members of the UI team spoke with a handful of science-minded students from J. Russell Elementary School in Moscow, who were called upon to conduct an experiment that helped them narrow the dimensions of its own research.

Kael Stelck, a member of the UI team, said they began the experiment with the elementary school students by introducing three different polymers they could potentially launch into space. However, the team had to limit their payload to dimensions and weight requirements set forth by NASA.

“We asked them to compare the polymers to each other and through their research and their experiments, they found that two of the polymers were significantly better than one of the other ones,” Stelck said.

To produce these results, Stelck said Russell students tried to grow bacterial cultures on one of the three polymers from swabs taken randomly from various environments.

The experiment that will be launched into space resembles a small box with some electronic components to spark and monitor progress. Inside the box, Stelck said the bacteria resistant polymers will be coated over a layer of aluminum and covered in a growth medium. Once in space, he said a series of motors will introduce bacteria to a growth medium and monitor how effective they are at limiting the bacteria’s growth within the microgravity environment of the International Space Station.

A small camera will snap pictures daily and after about 45 days, the experiment will be sent back to Earth where the team can evaluate their results as compared to an uncoated aluminum surface used as a control.

While bacteria can be carried to the space station through crew and supply payloads, it’s not often a problem there. However, Stelck explained, if humans expect to step further into the cosmos, they must identify ways to efficiently limit disease-causing agents for longer-duration space flights.

“A question that had to be answered in our proposal for NASA was how will your experiment benefit future space travel?” Stelck said. “We thought we could have this polymer that was resistant to bacterial growth and could be put on aluminum handles and high-touch surfaces on the space station or in a spacecraft — that would help reduce the risk of diseases and infection on flights.”

Stelck said it was inspiring to see the children’s deep interest and enthusiasm for learning. Many of the students themselves said they were excited to participate in real, consequential science.

“I think it’s really amazing how bacteria can grow in space,” said 9-year-old Jane Lawrence. “It was just cool to me for some reason — I also love science.”

Kael said he was connected with these young citizen scientists through his mother, Luella Stelck, who teaches science, technology, engineering, art and math — or STEAM courses — as part of Russell’s extended curriculum.

Both Stelcks agreed lots of “experiments” offered to children are simply illustrative of known science, but in this case, the experiment had real stakes and the potential to help advance scientific knowledge in a specific field. Luella Stelck said projects like this can be life changing and help to set young students on a trajectory toward a career in STEAM fields.

“There’s this identity that they’re building through participating in stuff like this,” she said. “It was really a fun thing for them to be involved in — for the whole school — because everybody had a chance to participate.” 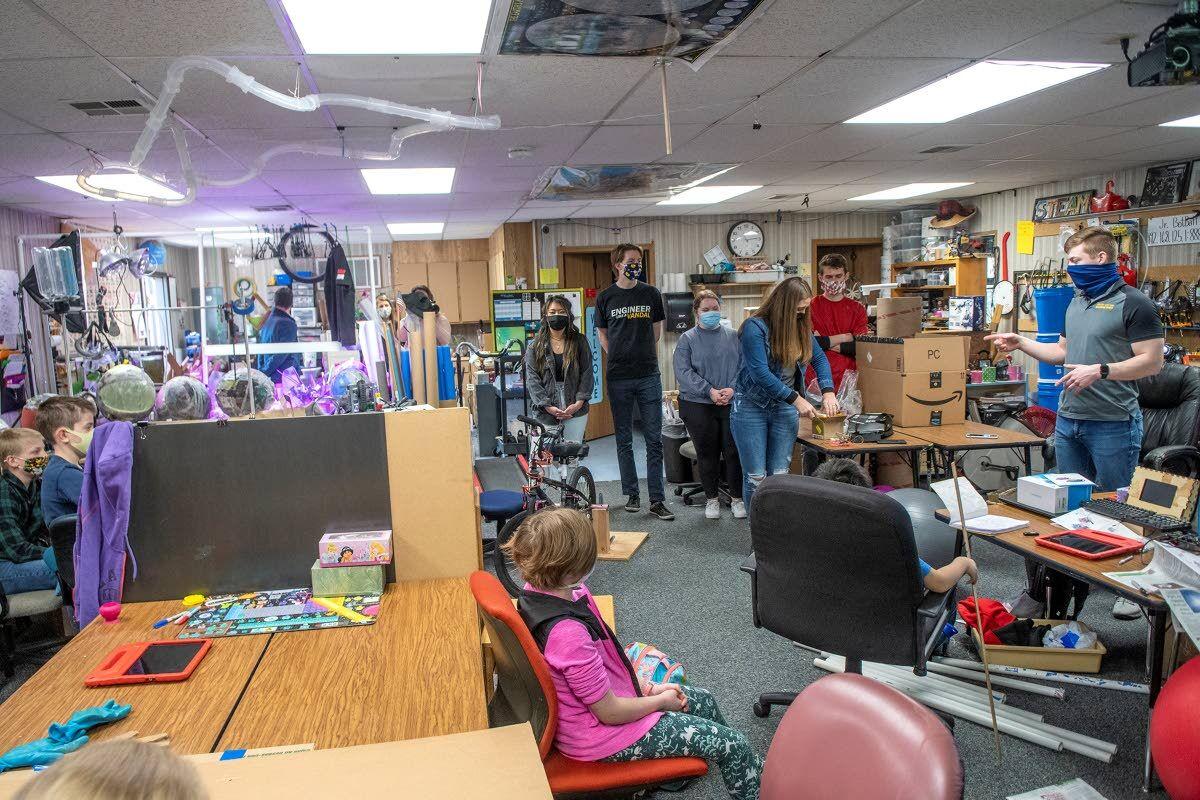 Students in University of Idaho’s chemical engineering program speak with students from Russell Elementary School about a collaborative project they are working on with NASA. Photo Credit: Zach Wilkinson/Daily News