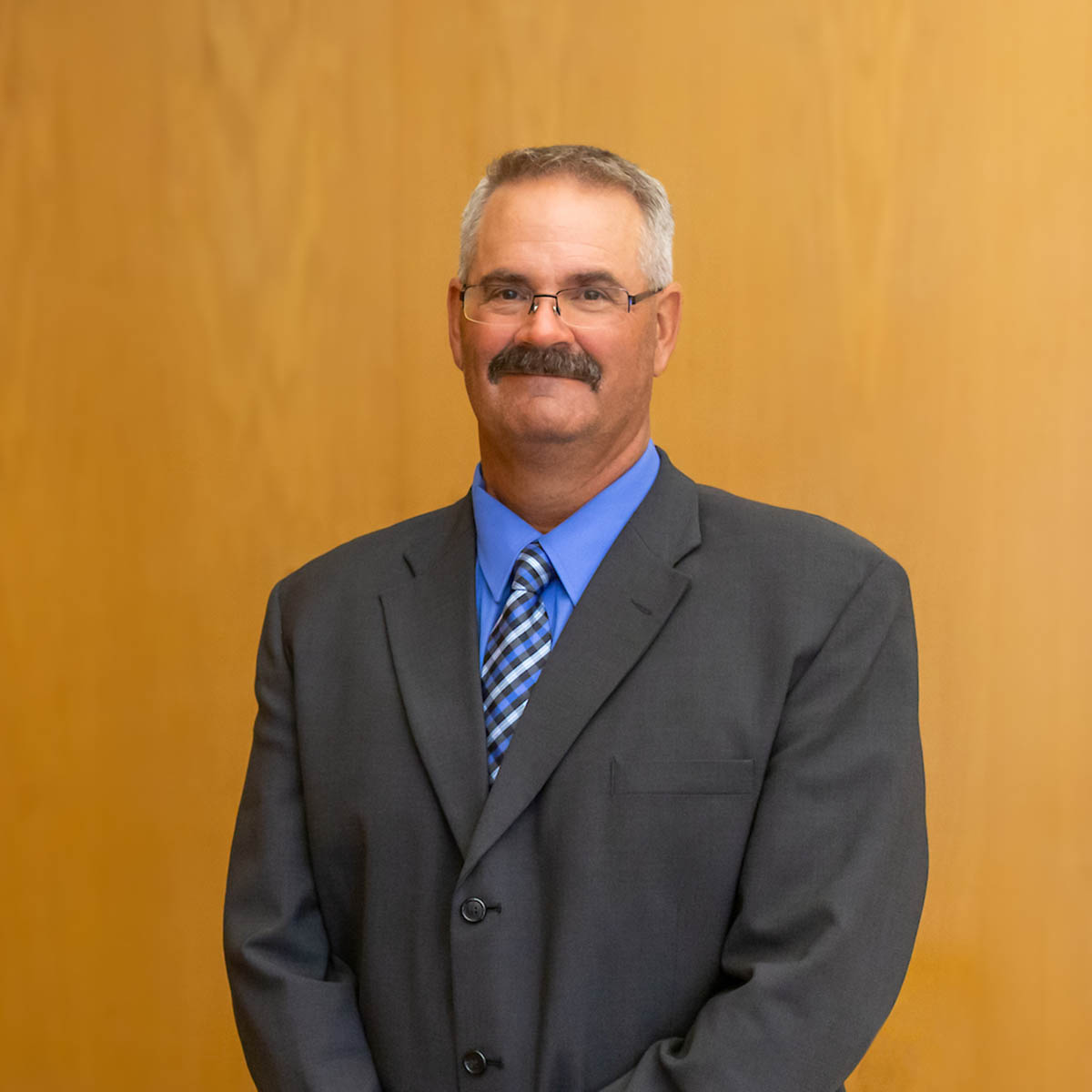 Eric Boos brings a broad academic background and a very diverse professional experience to the faculty of law for the 2020-21 academic year. He has a BS in Philosophy (St. Joseph’s College 1986), an MA in Applied Philosophy with a specialization in concepts of property (Bowling Green State University 1988), a PhD with specializations in jurisprudence and ethics (Marquette University 1996), a JD and an LLM with an emphasis in international human rights (Wisconsin 2002, 2003). He was a Foreign Language and Area Studies Fellow with the African Studies Program while in law school and served as the publications manager for the African Economic History journal and the journal.   He was on the Dean’s List throughout law school and received a State Bar award for academic excellence.

Prior to law school, Dr. Boos and his wife, Karene, (also a UW law school grad) helped start a Catholic College from the ground up in Tanzania. They also helped establish an orphanage, a hospital, a physical therapy clinic, two radio stations, and a metal fabrication facility that makes equipment for handicapped people. After law school, Dr. Boos was awarded a Fulbright Scholarship to return to Tanzania and teach law at Sokoine University in Morogoro. He conducted a nation-wide land tenure survey that focused on the property rights of indigenous pastoral people, women and small-holder farmers which led to changes in Tanzania’s land laws. He helped develop the graduate law program and human rights clinic at St. Augustine University in Mwanza, Tanzania. His teaching at St. Augustine earned him an invitation to serve as special legal counsel to the President of the International Law Division of the African Union.

As a Fulbright Scholar, Dr. Boos was invited to teach law at Vytautas Magnus Law School in Kaunas, Lithuania, and KIMEP University in Almaty, Kazakhstan, and he has been asked to negotiate land and water rights disputes in Tanzania and initiate social responsibility programs for multi-national corporations. He and his wife started their own human rights foundation, ZeruZeru, Inc., that protects children suffering with albinism in Tanzania.

He has taught law, philosophy, ethics, theology, political science and sustainable agriculture, but his specialties are jurisprudence, property, legal ethics, constitutional law, and international law and human rights. His publications include books on jurisprudence, property and education, and he has published law review articles ranging from health law, global economics, legal history, education, law and gender.

He was a litigator for Reinhart, Boerner, Van Deuren in Madison, Wisconsin, and made the first legal challenge to the pre-emptive status of medical director’s decisions under ERISA in Wisconsin history.

When not in the classroom or library, Dr. Boos will most likely be found on the golf course, or, hiking, biking, running, cross country skiing, or fishing somewhere in the great outdoors.

Justice Has Gone to the Dogs: Why Comfort Dogs are the Preferred Psychological Modality for Traumatized Witnesses in Court and Should Be Universally Available Under the ADA.

The Politics of Education: A Case for Liberal Learning. (Journal of the Society of Philosophy and History of Education, Vol. 62, 2012).

From Shareholder to Stakeholder: A Change in Focus for American Business and a Reason why Corporations Should Consider Social Responsibility Programs. (New North Business to Business Magazine, April 2010).

The Ontological Aspects of Stewardship from a Thomistic Perspective: Developing a Catholic Paradigm for Sustainability, (Renewing the Face of the Earth: the Church in the order of Creation Conference papers, St. Paul, MN, October 29-31, 2009).

Losing Ground: How the Lack of Opportunity for Women to Own Land Impales the Tanzanian Economy, in Feminist Conversations: Women, Trauma and Empowerment in Post-Transitional States. (Lanham, MD: University Press of America, 2009).

At the Intersection of Law and Morality: A Descriptive Sociology of the Effectiveness of Informed Consent Law. (Journal of Law in Society, Vol. 5, No. 2, Winter 2004).

The Dilemma of Divorce for St. Thomas Aquinas: A Conundrum for Legal Positivists. (Africa Tomorrow, Vol. 3, No. 1, June 2003).

Between Scylla and Charybdis: The Changing Nature of the EU’s Development Policy and its Effects on the Least Developed Countries of Sub-Saharan Africa. (Tulane Journal of International & Comparative Law, Vol. 11, Summer 2003).

Strange Brew: The Wisconsin Brewing Industry’s Opposition to Woman’s Suffrage, Prohibition and Changes to the Age of Consent Laws. (Southern California Review of Law and Women’s Studies, Vol. 12, No. 1, Fall 2002).

Tears for Tiers: The Stratifying Effects of Globalization in Tanzania. (Africa Tomorrow, Vol. 1, No. 2, July 2000).

The Mission of Catholic Evangelization for the New Millennium: A Call to Dialogue. (African Ecclesial Review, Vol. 40, No. 2, April 1998).

Moving in the Direction of Justice: College Minds—Criminal Mentalities. (Journal of Criminal Justice and Pop Culture, Vol. 5, No. 1, May 1997).

A Toothless Dog Can Still Bite: The Value of Official Recognition and Symbolic Law in Legitimizing a Human Rights Claim. (Invited Paper and Panelist at Human Rights Research Conference, University of Iowa, March 8-9, 2016).

Medical Malpractice for Pharmacists. (Presentation given to the Concordia University School of Pharmacy, February 23, 2015).

Reflections on 20 Years of Social Development Projects in Tanzania and the Moral Imperative of Helping Those Who Suffer With Albinism. (Presentation at the ZeruZeru, Inc., fundraiser, Fond du Lac, WI, November 2, 2013).

Plato’s Food Fight: The Difficulties of Developing a Philosophy of Sustainability in the Land of Plenty. (Presentation given twice at UWFDL, Fond du Lac, WI, October 8, 2013).

Liberal Learning and the Wisconsin Idea: Making the Most of a UW-Colleges Education. (Presentation to the First Year Experience Student Seminar, UW Fond du Lac, September 18, 2012).

Legal Education and Liberal Learning: How to Structure a Law School Curriculum and Develop an Appropriate Pedagogy for a Post-Socialist State. (Workshop given at KIMEP University in Almaty, Kazakhstan, May 18-23, 2012).

The Politics of Pedagogy: A Case for Liberal Learning. (Invited Paper for the Society of Philosophy and History of Education Annual Conference, San Antonio, Texas, September 29 to October 1, 2011).

Property Rights, Progress, Privatization and Problems for Pastoral Peoples: Is

Customary Law Enough to Save the Maasai? (Presentation at the University of Wisconsin—Fox Valley Scholars Series, Appleton, WI, September 20, 2010).

What Does Theatre Have to Do with the Serious Disciplines. (Panel Presentation with Professors Dick Gustin and Mike Nofz at the Engaging Students in the First Year Conference, UW—Fox Valley, Appleton, WI, May 25, 2010).

Of Crocodiles and Other Cross-Cultural Conundrums: The Plethora of Possibilities and  Privileges for a Liberal Arts Graduate.  (Commencement Address for the University of Wisconsin—Sheboygan, Sheboygan, WI, May 20, 2010).

Plato, Pollan and the Politics of Food: Why Omnivores Really Have a Dilemma and How an Epistemology of Eating Can Help. (Presentation for the Engaging Students in the First Year Program at UW-Fond du Lac, April 15, 2010).

Liberal Learning and the Wisconsin Idea. (Presentation to the Wisconsin Board of Regents, Spring Meeting at Fond du Lac, WI, April 8, 2010).

The Ontological Aspects of Stewardship from a Thomistic Perspective: Developing a Catholic Paradigm for Sustainability, (Invited paper delivered at the Renewing the Face of the Earth: the Church in the order of Creation Conference, St. Paul, MN, October 29-31, 2009).

Developing an Epistemological Paradigm for Teaching Legal Studies. (Presentation for the Department of Law, Politics and Justice at the University of Wisconsin— Superior, Superior, WI, June 5, 2006).

Privatizing the Land: The Pain and Promise of Land Tenure Reform in Tanzania. (Presentation for the Manchester College Peace and Justice Colloquium Series, North Manchester, IN, May 5, 2005).

The Politics of TRQ’s for Agricultural Products and a Shortcut for Change. (Presentation for the Executive Committee of Sales and Distribution at Dimon Tobacco Co., Ltd., Morogoro, Tanzania, September 25, 2003).

Accommodating the “African Growth and Opportunity Act”: What Tanzania Can Do to Expand Trade Relations With the United States. (Speech at the AGOA Conference held at Sokoine University, Morogoro, Tanzania, September 10, 2003).

Possibilities and Problems: What Tanzania Must Be Aware of for the Future of Global Trade

Under “AGOA” and the “WTO.” (Summary Report given to the Organizing Committee of the AGOA Conference held at Sokoine University, Morogoro, Tanzania, September 15, 2003).

A Novel Approach to Diplomacy: Books, Not Bombs. (Presented at Madison Rotary, July 11, 2003).

The Catholic Mission Mandate: Addressing the Interrelated Issues of Healthcare, Education and the Oppression of Women in Africa. (Presented at the St. Joseph’s College Mission Outreach Annual Conference, Rensselaer, IN, July 12, 2003).

From Religion to the Rule of Law: The Political Challenges of Starting a College in Tanzania. (African Studies Colloquium Series, UW-Madison, Madison, WI, February 6, 2002).

The Dilemma of Divorce for St. Thomas Aquinas: A Conundrum for Legal Positivists. (Presented at the 33rd Annual International Congress on Medieval Studies, Kalamazoo, MI, May 12, 1998).

Ethics Across the Curriculum from a Catholic Perspective: An Examination of Ex Corde Ecclesiae. (Presented at Viterbo College, LaCrosse, WI, April 12, 1997).