TranLIVE — Transportation for Livability by Integrating Vehicles and the Environment

Department of Civil and Environmental Engineering
College of Engineering and Technology
Norfolk, Virginia 23529-0241

U of I Forest, Rangeland and Fire Service

Converting under-utilized biomass from forestry and agricultural sectors into biofuels would benefit the nation’s energy security by displacing imported petroleum. More than 3 million tons/yr of biomass is available in the Pacific Northwest (PNW) alone (Skog et al. 2008). This level of biomass can theoretically produce 5 million barrels/y of pyrolysis bio-oils. Production of high yields of pyrolysis bio-oil, and their upgrading into "drop-in" fuels, still requires research on potential feedstock and catalyst development. Upgrading of pyrolysis bio-oils to biofuels has viable options for near-term commercial development for use in petroleum refineries. We will test the hypothesis that nickel (Ni) and ruthenium (Ru) catalytic surfaces can be grown on nanospring-supported mesh structures, which would enhance the catalytic hydrogenation of pyrolysis bio-oil to renewable fuels.

This project supported 2 PhD students (Alex Fouetio Kengne and Yinglei Han). We have been able to successfully produce Ni decorated nanospring catalysts on a stainless steel mesh support (see figure below, left). We have also produced (and chemically characterized) pyrolysis bio-oil from both Douglas-fir and poplar feedstocks (see photo of pyrolysis unit, right). We developed protocols for hydrodeoxygenation/hydrogenation treatment of bio-oil and model compounds and product evaluation using commercial Ni and Ru based catalysts initially. We successfully synthesized Ni decorated nanospring catalysts (Ni-NS), in small amounts (mg level) and characterized the catalysts. It was shown that the Ni-NS catalyst had to be reduced (activated) before use. The Ni based catalysts were able to hydrodeoxygenate the model compounds and bio-oil and conversion was Ni content and temperature dependent. Low conversions using the Ni-NS catalysts were obtained, but only very small amounts of catalyst were used. Further work is required to scale up the Ni-NS catalyst production, increase Ni loading on NSs, and modify the reactor for future work in bio-oil upgrading. 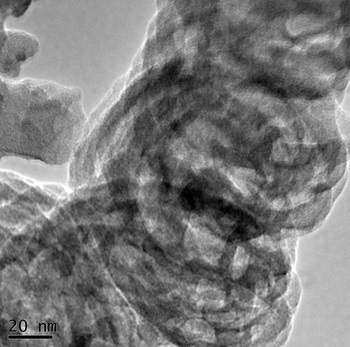 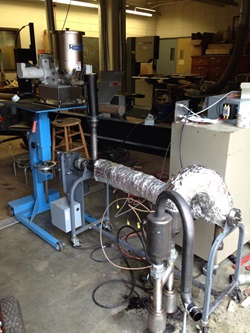 A poster was presented at TCBiomass 2013, September 3-6 in Chicago, Illinois, by Armando McDonald. KLK906_Poster-TCBiomass 2013

Impacts and Benefits of the Project

The main impact of the project is the improvement of bio-fuels production which in turn will contribute to reduce the dependency from fossil fuels largely used in the transportation sector.

We have successfully synthesized nano-catalysts for pyrolysis bio-oil grading.

Department of Civil and Environmental Engineering
College of Engineering and Technology
Norfolk, Virginia 23529-0241