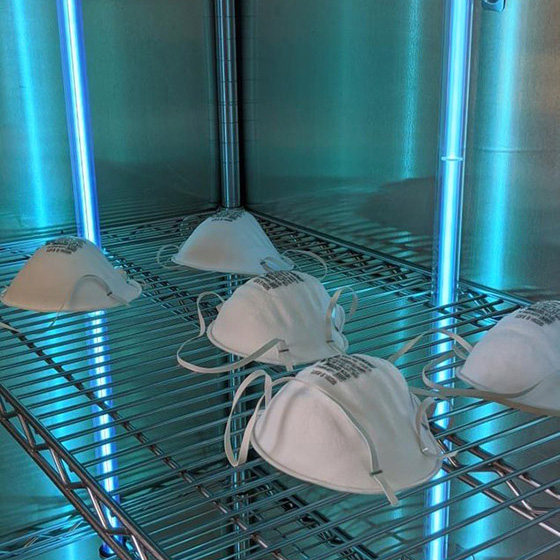 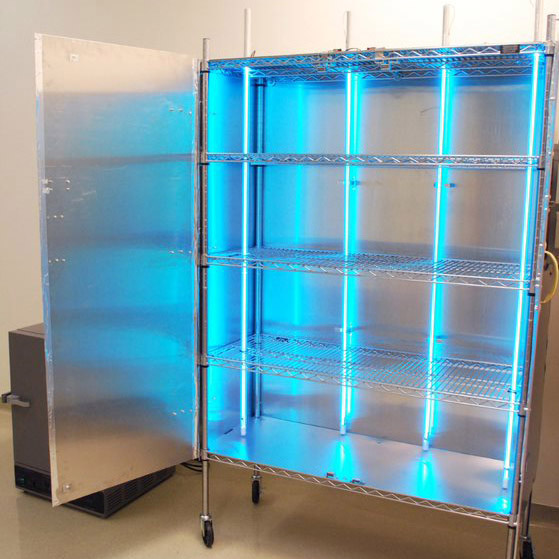 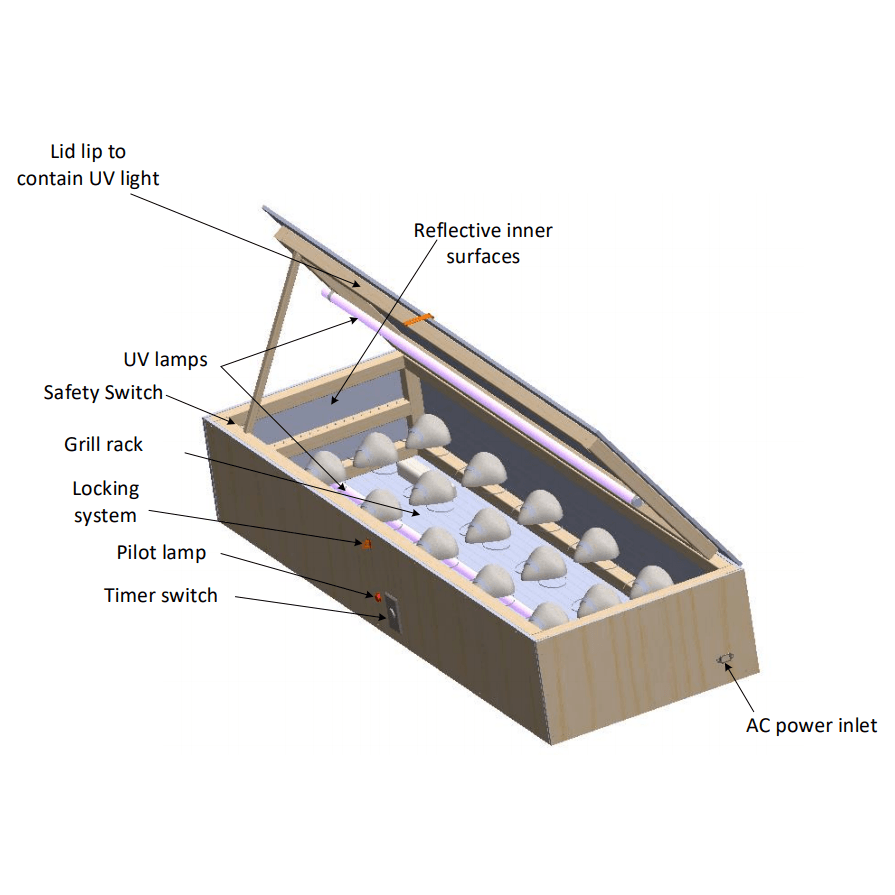 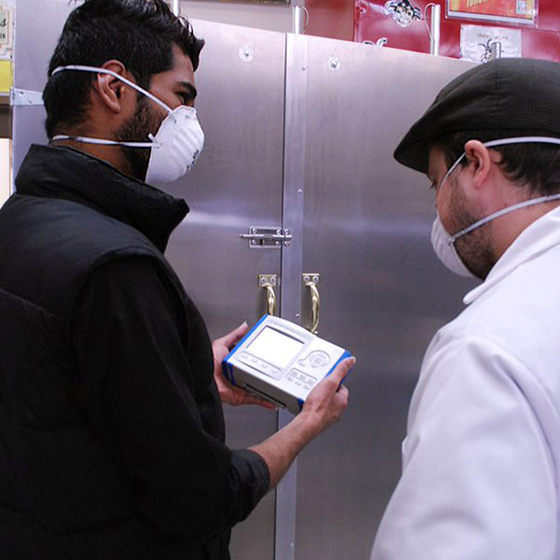 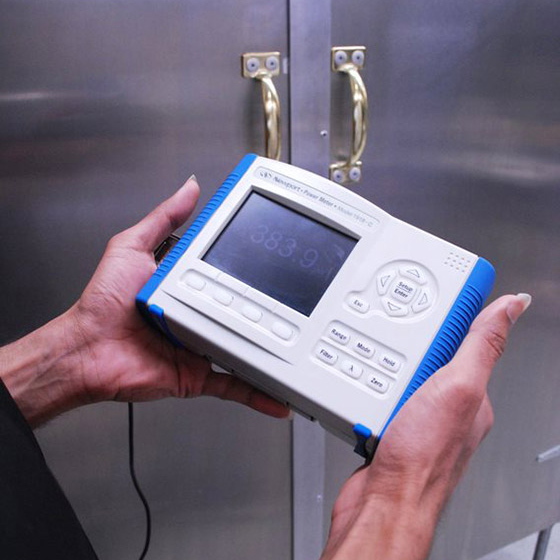 Mobile mask sterilization stations that can be used to clean up to 32 masks at a time. The system uses ultraviolet C (UVC) light, a short-wavelength light capable of converting the virus into harmless carbon compounds and water.

We do not supply PPE or related products, but you may use these resources to create your own!

Is there any way we can request your bulbs?

Yes, please email engr-covid19@uidaho.edu with a description of your project and need. We don’t charge for them, but we do ask that you cover shipping charges. UPS has a “Bill Receiver” option.

What type of UV bulb can be used for sterilization?

The studies shows that only UV-C range of ultraviolet light is effective in killing the virus. UV-C has wavelength less that 280 nm but most UVC lamp has 254nm wavelength. UV-A and UV-B are not proven effective for this application.

Can we collaborate with you on your project and perhaps learn something from each other?

Yes, this has been a collaborative project with people across the inland northwest. Our primary objective at this point is to help others replicate the sterilization equipment at their location. Reach out to us by emailing engr-covid19@uidaho.edu

What dose is your UV prototypes delivering during their cycle?

The target UV dose for wavelengths around 250 nm is 1J/cm^2 to deactivate virus similar to SARS-CoV-2 on N95 as recommended by a the University of Nebraska report (https://www.n95decon.org/uvc). With the UVC bulbs we are using, a treatment period on the order of 15 minutes will achieve this level.

How many bulbs do you have?

We have few dozen at hand. But Joe Kaufman, one of our Alumni and who has provided these bulbs to us, says he can get more if needed. Also, there are vendors who carry those bulbs.

What is the price and availability of the UV light sterilization boxes?

Plans are available online for free. The hardware cost to build a wooden box with aluminum foil lining is approximately $150.00 excluding labor. We are not authorized to sell the boxes. However, if you want help, we can provide technical support. Reach out to us by emailing engr-covid19@uidaho.edu

Have you considered whether this sort of device might be effective for non-medical sanitization for COVID-19 (e.g., gaming console devices)?

The unit should kill virus provided there are no obscured surfaces. If UV light can't reach a spot, there is a possibility that the virus will survive at those places. I do not believe there is any easy way to test if all virus has been killed. We are designing this from a study that 1J/cm^2 or higher amount of UVC radiation is enough to kill SARS CoV2 virus. Also, it is possible that objects life will degrade from exposure to intense UV light. So we would suggest to evaluate your situation looking at objects you want to sanitize and make the best judgement.

What is the required exposure time for UV-C sanitization?

Here is the procedure, in a nutshell and then detailed.

It takes a killing dosage of one Joule per square centimeter of UVC radiation to kill the corona virus, according to several medical and bioengineering papers that I read. In researching a host of UVC tubes, I found that their efficiency in converting input electrical power to radiated UVC is almost always about 35% to 40%. Therefore, to get the wattage radiated as UVC, divide the rated input electrical Watts by three. Now calculate the surface area of a cylinder whose radius r is the distance from the fluorescent tube center line to farthest point that you want sterilized; h is the length of the fluorescent tube. Area = 2 * pi * r * h. To get the power density, divide Watts UVC by the Area. Now divide the killing dosage by the power density. Joules per sq cm divided by Watts per sq cm is seconds. The result is the killing time. Do your calculations with units as we taught you to do in basic college Chemistry and Physics as a check on your work.

If you want greater accuracy and a quicker kill time and you have more than one tube, power densities sum as vectors. If vectors are not your thing, add together all the power densities that you calculate from each bulb to the farthest point that you want sterilized and multiply by 0.7 to get the total power density. The math behind the 0.7 is trigonometric, a cosine function or a dot product, and assumes an angle of no more than 45 degrees formed by the two bulbs and the farthest point, a pretty reasonable assumption. But this summing of power densities is probably too complicated. Skip it if you prefer and just calculate the kill time from the nearest tube and leave it at that.

Some have suggested sterilizing twice to be sure that the virus is dead. As satisfying as that may be, it is a bad idea. Dead is dead; trying to kill something already dead is wasteful. UV light is well known to degrade the quality of many materials such as plastics and rubber. Hitting the equipment a second time means one fewer sterilizing cycle available before the gear wears out. Most of the papers that I read seem to indicate that at least ten sterilizing cycles can be done without risking PPE equipment performance.

How could I help with your ENGR-COVID effort?

You can help by contributing to 3-D mask printing network. Email Cassidy Hall (cassidyh@uidaho.edu) to find out how to help with 3D printing. You may also contribute by donating to this cause.

A project of this magnitude takes the expertise of many talented individuals. Learn more about our team and the different roles in this project.

Although every effort is made to ensure the accuracy, currency and completeness of the CAD software design files and instructions, the University of Idaho does not guarantee, warrant, represent or undertake that the information provided is correct, accurate or current. The University of Idaho is not liable for any loss, claim, or demand arising directly or indirectly from any use or reliance upon the information.

Please direct questions to engr-covid19@uidaho.edu. Your emails will receive a prompt response.