Lamprey routinely swim through the fish ladder at Bonneville dam.

Watching a lamprey swim through a fish ladder at Bonneville dam, one wonders why this native species wouldn’t thrive on its way to the Snake River.

That is just one of the many questions being asked in a multi-faceted, $2.7 million research project funded by the US Army Corps of Engineers (USACE) and answered by a team of more than 20 UI researchers. They are under the direction of Christopher Caudill, assistant professor in the Department of Fish and Wildlife Science in the College of Natural Resources.  The current project is an extension of more than a decade long effort by UI, NOAA-Fisheries, the USACE and tribes to improve migration conditions for lamprey.

Lamprey, while native to the Columbia River system, have been in decline since the installation of dams starting in the 1960s. The fish ladders were built with salmon in mind, Caudill says. No provisions were made for the eel-like lamprey.  Adult lamprey reaching Idaho pass eight dams, and fewer than 100 lampreys have been counted passing Lower Granite Dam near Lewiston each year in recent years.  Lampreys are an important cultural and natural resource for regional tribes, but have been mostly ignored by western cultures until recently.

“Though fascinating, lamprey aren’t easy to love,” he says, “They could be called vampire snake fish.” They look like thick snakes. Their mouths, which they use for suction to attach to and live on other fish in the ocean, don’t close around the rows of sharp teeth. Like salmon, lamprey grow large in the ocean, but unlike salmon, most of their life is spent in freshwater. There they may play a vital role to the ecology of the river system, partly because of the nutrients they bring back to the fresh water. The ancient fish are now protected and Caudill says he hopes this long-term investment to better understand the fish will help keep it from being listed as endangered under the Endangered Species Act.

As part of the project, lamprey-specific ladders were designed by UI engineering graduate students Hattie Zabbot and James “Channing” Syms, and installed at Bonneville and John Day dams. These ladders allow lamprey to “climb” 45-degree ramps in a thin sheet of water by alternating swimming with attachment using their mouth.  These are components of larger efforts by the USACE, NOAA-Fisheries, tribes and states to increase the number of lamprey making it into and through the ladders.

In a related study, UI Department of Fish and Wildlife Sciences graduate student Mark Kirk is testing the limits of lamprey swimming abilities in a large test flume at Bonneville Dam and using an ultrasonic camera to monitor behavior in fishways to aid future design of improvements for lamprey.  These trials may shed light on how lamprey respond to predators such as sturgeon, why some lamprey get to the top of the ladder but then turn around and go back down, and why only the biggest lamprey are consistently making it through the series of dams and into the Snake River.

graduate with all the tools you need to become a fisheries management professional
B.S. Fishery Resources 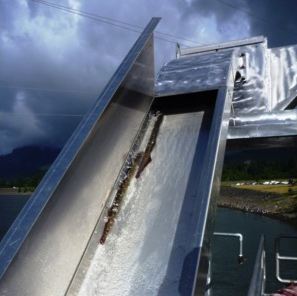 The eel-like fish play an important role in freshwater ecosystems. 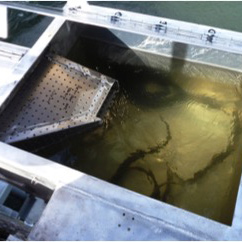 Zabbott and Syms' system provides resting boxes for the fish 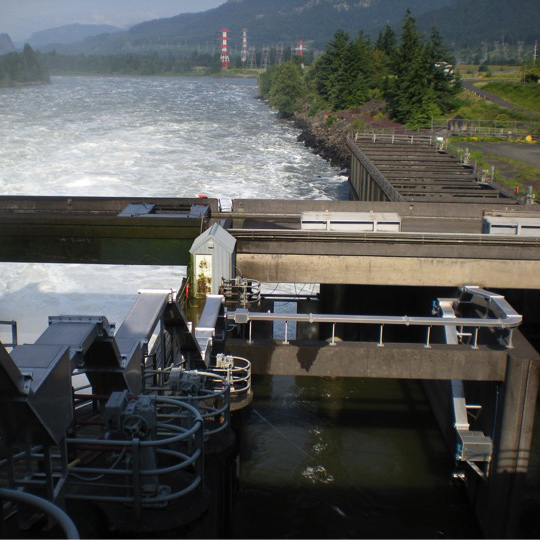 The lamprey ladder systems are already in place at Bonneville and John Day dams. 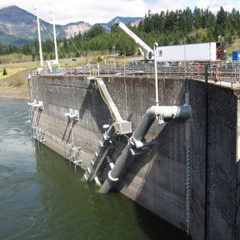 The lamprey ladder systems at Bonneville and John Day dams allow fish to enter the system from slack water areas. 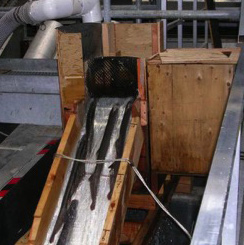 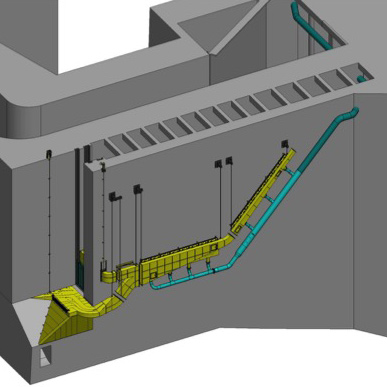 Entry design for the lamprey systems at Bonneville and John Day dams. 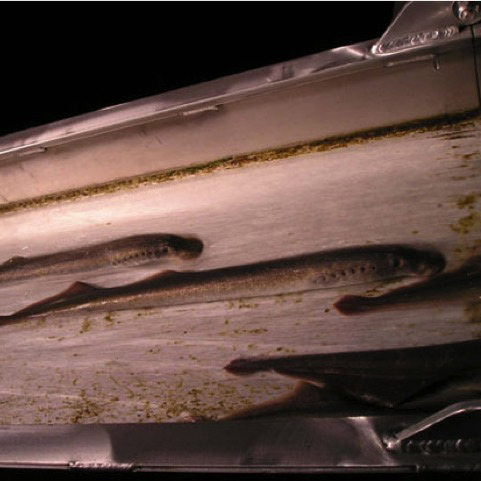 Caudill says many factors could play into it. Sturgeon pooling at the entry to fish ladders may keep the lamprey away. Smaller lamprey may not have the endurance to make it over the series of tall dams. Water flow may be too rapid at entrances to the ladders. Those are all possibilities examined in the studies.  For example ultrasonic cameras have been installed in Bonneville dam to better watch the interaction of species and the movement of lamprey.

In a companion study performed by former Fish and Wildlife Sciences graduate students Chris Noyes, Eric Johnson and Tami Clabough, lamprey are also being tagged with acoustic trackers and PIT-tags (similar to microchips now used in pets) so they can be monitored along the route. Many lamprey go missing between Bonneville dam and The Dalles and may be victims of predation or other mortality factors, or may be successfully spawning in small unmonitored tributaries or below dams. The scientists are determined to figure out which.

However, lamprey studies and potential changes to fish ladders cannot be done at the expense of Chinook salmon and steelhead trout. These fish have significant historic and economic significance both regionally and nationally.

If successful, dams along the Columbia and Snake rivers may install similar lamprey ladders of the new design, which may significantly increase populations of native fish populations that are so important to the heritage and culture of Americans, beginning with the region’s indigenous Indian tribes. Similarly, the salmon studies will contribute to regional salmon recovery efforts currently underway by regional, federal, state and tribal agencies.