The fall semester is coming to a close as we reach the midpoint of finals week.

Food for Finals is in full swing thanks to the generosity of donors who want CALS students to enjoy healthy, nutritious meals and focus their attention on their studies.

The event has a long tradition and stands out as one of the efforts that makes CALS a great home for students.

We had an opportunity to celebrate one of the college’s long-time supporters, Bill Newbry of the Genesee-based Pacific Northwest Farmers Cooperative, Saturday during commencement. He received an honorary doctorate in agricultural science for his work for PNW and his efforts to support agriculture as a whole.

PNW has supported transportation costs for high school students to travel to Moscow, providing one of our best opportunities to showcase what we offer and allow prospective students to see themselves attending school here.

The PNW effort is one example of how CALS relies on the support of our alumni and friends. We all recognize that the future of agriculture relies on educating our students and taking every opportunity to inform people about agriculture.

Beyond education, our research collaborations are making gains. We noted the importance of the Idaho Wheat Commission and Limagrain Cereal Seeds recently with the proceeds from royalties being invested back into the programs that generated them.

Another vital agricultural leader, the Idaho Potato Commission, is increasing its partnership with CALS by supporting a new potato germplasm facility on campus. This new facility will increase our capacity to produce high quality healthy, disease-free plantlets and mini-tubers for iconic Idaho potato industry. Look for more details regarding this partnership as we enter the new year.

On another level of collaboration, l have the pleasure of serving on the advisory committee for the Idaho Rangeland Resource Commission at the state level and the UI Rangeland Center. Both serve key roles in the state, and CALS works with both.

One of beneficiaries of these CALS collaborations is the Nancy M. Cummings Research, Extension and Education Center near Salmon and at the Rock Creek Ranch near Hailey. CALS ability to address issues surrounding range, livestock, ecosystem services, endangered species, etc. is best served with broader collaborations.

This time of year, it is good to have friends, and to reflect on their importance to the college and to the communities they serve.

In that spirit, I wish you a happy holiday season and prosperous 2018. 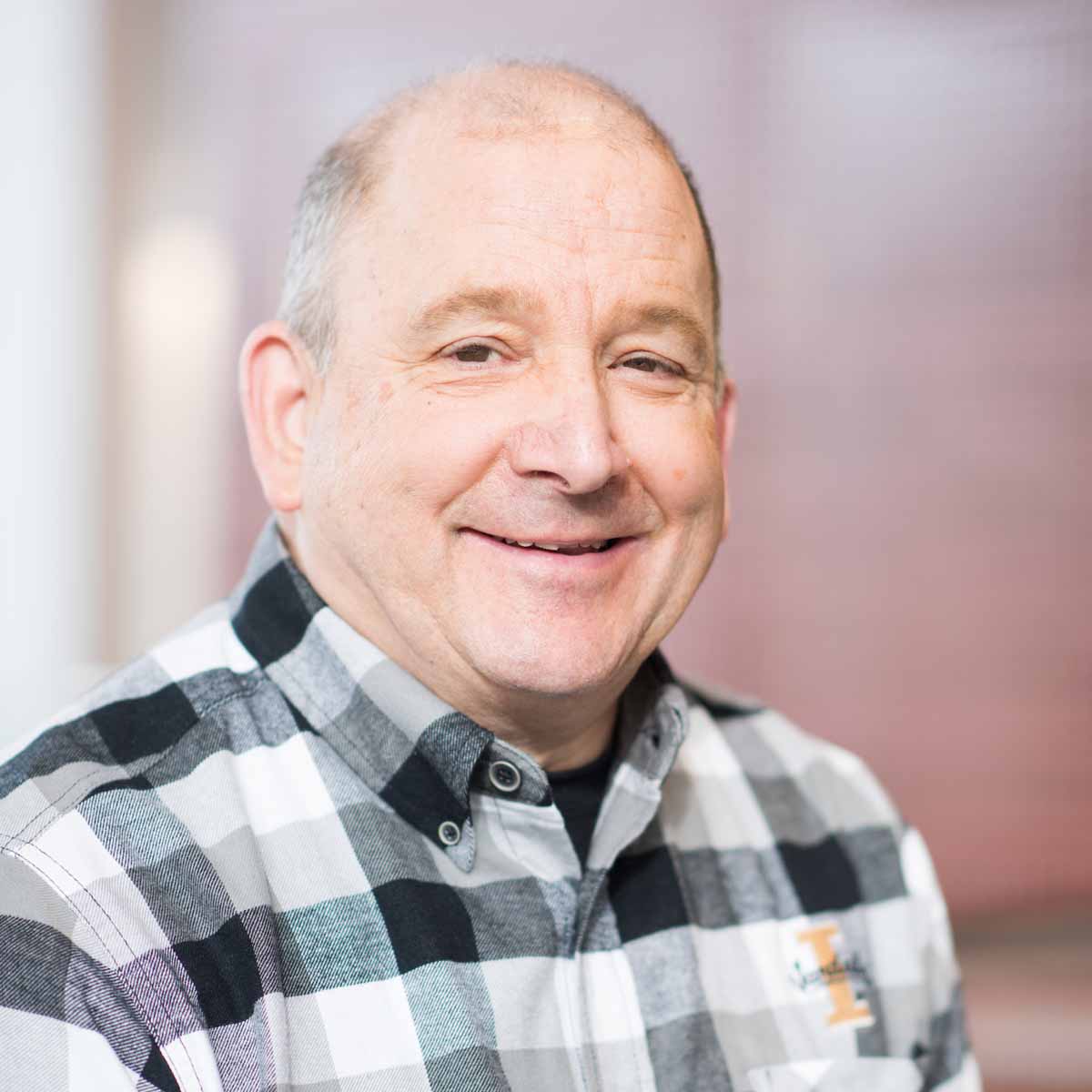 111 percent — if healthy eating equals exam preparation, that’s the apparent effort CALS students are putting out during finals week this year compared to last. Food for Finals week tallies for the first two days equal 460 this year, an increase of 47 from 2016’s 414 students who lined up for breakfast and lunch. Food for Finals, which is supported by funding from donors and CALS, served 916 students last fall. Food for Finals served 914 students during the spring semester finale.

Our Stories — Honoring a Commitment to Agriculture

Pacific Northwest Farmers Cooperative CEO Bill Newbry can only laugh now about a call earlier this year from “Chuck” at the University of Idaho.

“I thought it was a joke by some of the Vandals around here having some fun so I was pretty sarcastic during the first part of the call. I’m sure he went home that night and told his wife that the university wants to give this guy an award but he’s pretty sure there was a mistake,” Newbry said.

The call to PNW’s headquarters in Genesee was from U of I President Chuck Staben to congratulate Newbry on the university’s decision to award him an honorary doctorate in agricultural science during fall graduation.

CALS Dean Michael Parrella called Newbry a tremendous partner to the University of Idaho and a gracious and giving supporter of Idaho communities during a reception Dec. 9. Newbry has been a strong supporter of FFA programs and CALS student interns at PNW.

“I am honored to be a part of the recognition today for Bill Newbry, a well-deserved partner of the university who has made a considerable impact on the agricultural industry and the state of Idaho,” Parrella said.

Idaho Gov. C.L. “Butch” Otter wrote a letter supporting Newbry’s nomination for the honorary degree. “Bill’s notable career has had a significant impact on our state’s economy and created opportunity for many through his passion, innovation and inspiration,” the governor wrote.

“Actually, it was embarrassing, very humbling,” Newbry said. “There are so many more people who deserve the recognition.”

The cooperative’s employees deserve the credit for its success because they serve the growers and market the agricultural products. “It’s a great company, and we have the growers’ best interests in mind. This is a shared honor with my staff and growers,” Newbry said.

The College of Agricultural and Life Sciences nominated Newbry for the award for his business acumen. During the past three decades, Newbry led the expansion of the Genesee Union Warehouse into the PNW Coop, an international trading and transportation powerhouse.

“I never really thought I was building a company. I was just doing what I love to do,” Newbry said.

I think it is a great opportunity to load FFA members on a bus and bring them to campus so they can learn agriculture. And it’s selfish, because we need to encourage more students to prepare for careers in agriculture,” Newbry said.

The National Academy of Inventors has elected U of I researcher Greg Moller as a fellow of the academy for his innovative work to clean wastewater in Idaho and worldwide.

Moller, a member of the CALS faculty since 1990, holds six patents. All of them are licensed by companies that treat wastewater from communities and businesses. Moller also has three patents pending final approval.

An environmental chemist and toxicologist in the U of I-Washington State University School of Food Science, Moller works on softening people’s environmental footprint.

The selection of fellows honors those who have demonstrated a highly prolific spirit of innovation leading to inventions that have made a tangible impact on quality of life, economic development and the welfare of society.

“The National Academy of Inventor’s recognition of Greg Moller’s research, which clearly addresses real world problems facing our society, is well deserved. His innovative approach to addressing the need for clean, consumable water makes a real impact and reflects the U of I’s commitment to excellence in our researchers, faculty, staff and students,” said Janet Nelson, U of I vice president for research and economic development.

“We in the College of Agricultural and Life Sciences are proud to congratulate Greg Moller for this honor and his innovative approaches to research and teaching,” said Michael Parrella, the college’s dean.

Moller leads a U of I team that is among 10 semifinalists in The Everglades Foundation’s $10 million George Barley Water Prize competition. The foundation seeks innovative technologies to treat large-scale algae problems that plague lakes and rivers worldwide.

The National Academy of Inventors recognizes and encourages inventors with patents issued by the U.S. Patent and Trademark Office. Founded in 2010, the academy has elected more than 900 fellows. Its membership includes more than 250 U.S. and international universities, and governmental and nonprofit research institutes.

Moller’s inventions to reduce pollutants, including phosphorus and nitrogen, in wastewater were commercialized. The inventions now treat billions of gallons of wastewater a year across the U.S. and in Great Britain and South Korea.

“I’m humbled to be included with such a distinguished group of individuals,” Moller said. The academy’s fellows include Stanford University’s president and the National Science Foundation’s former director.

Moller's newest technology, the U of I Clean Water Machine, mimics natural processes to remove phosphorus and nitrogen from wastewater. The university’s research team of Moller, soil scientist Dan Strawn and mechanical engineer Martin Baker will participate in a pilot-scale test this winter treating agricultural runoff water in Ontario, Canada.

The U of I team plans to visit Idaho’s Treasure Valley and the Boise River basin next year to test the technology’s ability to remove phosphorus and nitrogen from waters there.

Phosphorus and nitrogen are blamed for causing toxic blue green algae blooms that have forced cities near Lake Erie to find other drinking water sources. Floridians along the state’s Treasure Coast also contend with reduced property values from algae blooms nurtured by nutrient-rich runoff from the Everglades.

Moller’s research led the Water Environment Federation to award him the Harrison Prescott Eddy Medal for vital contributions to water research. His team’s technologies were cited in the list “25 Innovations that Changed the World” by the Association of University Technology Managers.

In addition to his work as an inventor and researcher, Moller won a national excellence in teaching award from the Association of Public and Land-grant Universities and U.S. Department of Agriculture National Institute of Food and Agriculture. He has received numerous teaching and research awards.