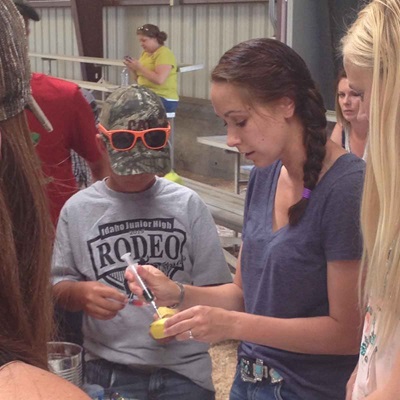 Meranda Small may have grown up on a wheat farm in Grangeville, but it was her love of livestock that led her to purse a degree in animal science at the University of Idaho. Small graduated with a bachelor’s in animal science in 2011 and a master’s in agricultural and Extension education in 2014, both from the College of Agricultural and Life Sciences.

After earning her bachelor’s, Small spent a year as an intern for Agri Beef Co., while working on her master’s degree. The experience with Agri Beef gave her a greater understanding of the beef industry on a large scale.

After completing her master’s, Small took a position as an Extension educator with University of Idaho Extension in Oneida County, focused on livestock education and 4-H youth development. Small recently transitioned to the UI Extension office in Bannock County where she will continue to focus on animal science and 4-H.

In her role, Small works with other educators to put together livestock-agriculture based programs, such as camps for youth involved in livestock 4-H and FFA; cowboy and beef schools for local producers; and new programming benefiting livestock agriculture throughout the state. She also writes educational articles for media and local newsletters, giving her the chance to connect with more producers.

Being able to work with a wide variety of people is one of Small’s favorite parts of being an Extension educator.

“It’s a tie between the people I get to work with and the fact that I rarely do the same thing two days in a row,” she said.

The decision on where to pursue higher education after high school was an easy one for Small.

“I’m an Idaho farm girl and the UI is Idaho’s ag college,” she said.

Growing up, Small participated in 4-H, where she completed livestock-based projects. She also spent time working as a ranch hand.

Small was able to continue the hands-on work with livestock while on the Moscow campus.

“A big part of my UI education experience was the time I spent as a research assistant managing a small herd of beef cattle on a feeding trial and later assisting with surgeries on sheep,” Small said.

Pursuing a master’s degree was the logical next step in Small’s education.

“Going into agricultural education felt like the natural next step so that I could still work with producers and learn how to better communicate to them my science and hands on knowledge,” she said. “I was able to complete my degree while also working out in the industry, really setting me up to kill two birds with one stone.”