Every day, Koretaka Ueda goes to the library in his hometown of Higashi-Hiroshima City, Japan. He tends his rice fields and walks at least 3,000 steps, rain or shine.

Not bad for a man approaching his 100th birthday.

“It is an insult to think that someone has to die at age 100,” Ueda told University of Idaho researcher SeAnne Safaii through a translator. Safaii traveled the globe over the past year studying the diets and lifestyles of centenarians. “That is a good goal for someone who is 60, but I plan to live to at least 107!”

Safaii, an associate professor in U of I’s Margaret Ritchie School of Family and Consumer Sciences in the College of Agricultural and Life Sciences was impressed with Ueda’s enthusiasm and energy when she met him at his home in the summer of 2015. His goal in life, he told her, is to stay independent and active.

His diet is typical for his region: miso soup, potatoes, fish, rice, vegetables, beans and green tea. He consumes around 25 grams of protein at each meal.

“Health is like a battle against yourself,” Ueda said. “The tendency is to become more dependent and weaker as you age, but in fact it is just the opposite. If you are able to walk upstairs, then do it. Appreciate your health.”

Joining Safaii in her worldwide research is U of I alumna and nutritional gerontology expert Sue Linja. Together, they gathered the funds to make this research possible. The duo is studying what elements in diet and lifestyle help their subjects reach 100.

Among the subjects they interviewed were Michele Salaris, 97, and Michele Nuges, 98, two Italian shepherds from Sardinia, Italy, who mirrored Ueda’s energy, love of life and daily habits, only with different foods. Goat’s milk, pecorino cheese, fish, beans and other legumes made up most of their proteins, which were consumed equally at meals throughout the day. (See recipe for minestrone soup)

Safaii, a registered dietitian, researcher and educator, came to U of I in 2008 after nearly 15 years working for the Idaho Department of Education. She is also past president of the Idaho Academy of Nutrition and Dietetics, where she served with Linja, also a past president. After graduating from U of I in 1988, Linja became a registered dietitian, nutritionist and business owner. With her specialty in geriatric nutrition, Linja built a successful nutrition and long-term care consulting businesses that employs over 50 dietitians and oversees nutrition services in 120 long-term care facilities in nine western states.

“Sue has a gift for communicating with the elderly,” Safaii said. “To see her interact with them and watch her warmth and compassion is truly amazing. In Italy, everyone thought she spoke fluent Italian; they would talk directly to her without paying much attention to the translator.”

Both researchers share a passion for nutrition, food and travel. With help of translators and tour guides, they visited cities and remote villages in Japan, Italy and Singapore, to meet and talk with about a dozen centenarians. In the United States, they met with 100 year-old Regina Otter, mother of Idaho Gov. Butch Otter, whose “longevity food” is potatoes, which Ms. Otter says she has eaten several times a week for her entire life.

Breakfast Challenge, are you up to it?

Adding 25-30 grams of protein to your breakfast is hard to do, especially if you are a coffee and toast kind of person Safaii and Linja compiled this list of foods you can add to your daily breakfast routine that to increase your protein intake.

Safaii and Linja also recommend that those wanting to live a long, healthy life have 100 minutes of physical activity every day, but not necessarily by going to the gym. Here are some ideas to include physical activity in your day:

Courtesy of SeAnne Safaii and Sue Linja, from their ‘top 100 anti-aging foods’ list.

Contributors to a longer, healthier life

Their research has helped Safaii and Linja identify activities and food that may contribute to a longer, healthier life: lots of activity, protein intake distributed throughout the day, the consumption of fresh foods, little meat, non-rushed meals and eating fermented foods, legumes, vegetables and potatoes.

“It was interesting to see that across cultures, centenarians referred to the food they eat as ‘genuine,’” Linja said — mostly fresh, seasonal and locally produced produce.

“We also found that in all these countries, protein intake was spread throughout the day,” Linja said. “Their diets were high in plant-based protein, fish, beans and vegetables.”

Existing research shows that distributing protein intake throughout the day helps prevent muscle loss, Linja said. Normal aging combined with inactivity can cause higher than average loss of muscle mass — called sarcopenia — as much as 3-5 percent of the body’s muscle per decade. Sarcopenia typically accelerates around age 75 and is a huge contributor to illness and early death.  Linja said she sees this often in long-term care facilities.

“Having a little protein at every meal instead of a larger portion in one meal really helps the body,” Linja said. “Distributing the protein intake helps aging bodies absorb the protein better and more efficiently.”

“Sarcopenia may be influenced and even prevented by the way we consume protein, in small amounts throughout the day,” she said.

A third common factor that the two dietitians observed from their research of centenarians was the consumption of fermented foods, such as tofu or wine.

Fermentation uses the help of microbes to create an acidic environment to preserve foods, develop their flavor and change their nutritional and enzymatic properties. In this process, the food becomes predigested by bacteria and allows the nutrients to be more easily absorbed by humans.

“Fermentation has been around since the Paleolithic age,” Safaii said. “Fermented foods are excellent source of probiotics. Whether for preservation or medicinal, it was, and continues to be, an important dietary practice.”

Emerging research suggests that fermentation may make certain nutrients and food chemicals more available for the body to use.

“Though more research is needed, current evidence still gives us good reasons to consider getting a daily dose of probiotics from a fermented food source,” Safaii said.

Safaii and Linja plan to write a book about their interviews with centenarians — as well as hold public presentations, including talking at the Idaho Academy of Nutrition and Dietetics Annual Conference in Pocatello in April and at the Today’s Dietitian Conference in Florida in May. In their book, they’ll include their findings combined with their conversations with centenarians, scientific evidence and nutritional information.

The two dietitians say it is always a good time to change your eating habits. Even at 60 or 70, eating healthier can make a difference in your health.

“Today’s baby boomers are facing the probability that they may well live to 100 years old.” Linja said. “Health officials predict that by 2050, roughly 800,000 Americans will  reach the century mark, so the question for us became, how do we live longer and still maintain a high functioning quality of life?”

Article by Maria Ortega, U of I Boise Marketing & Communications 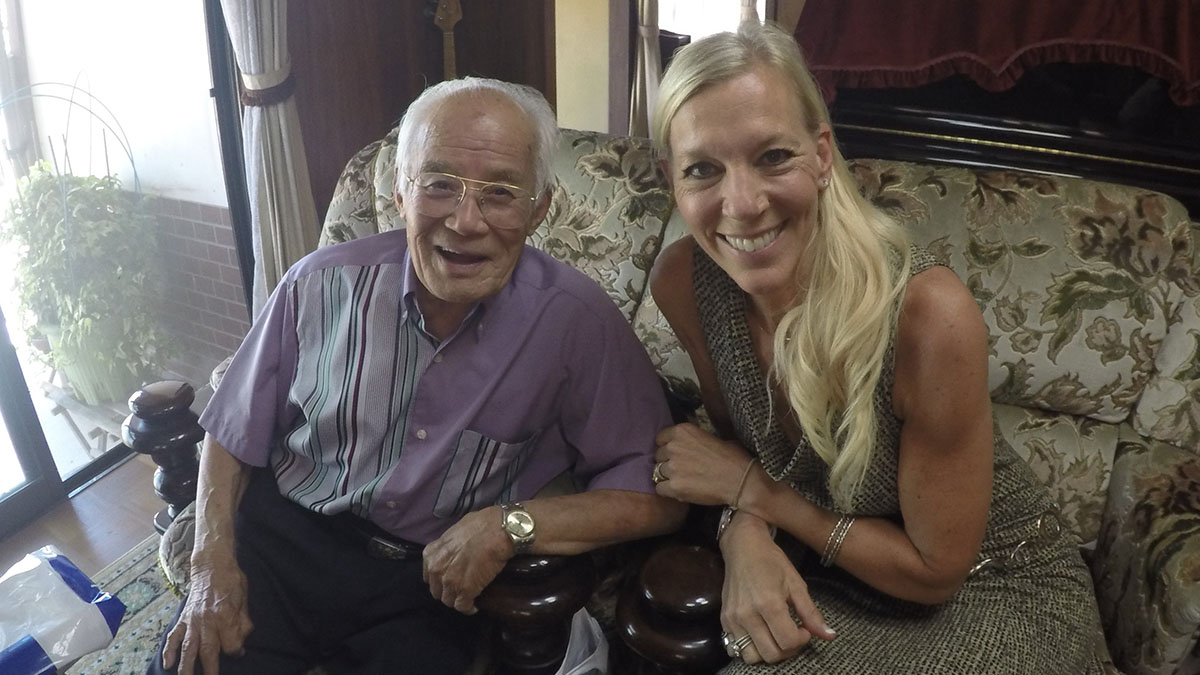 1 of 8: Koretaka Ueda, left, shown with Safaii during the interview at his house in Higashi-Hiroshima City, Japan. 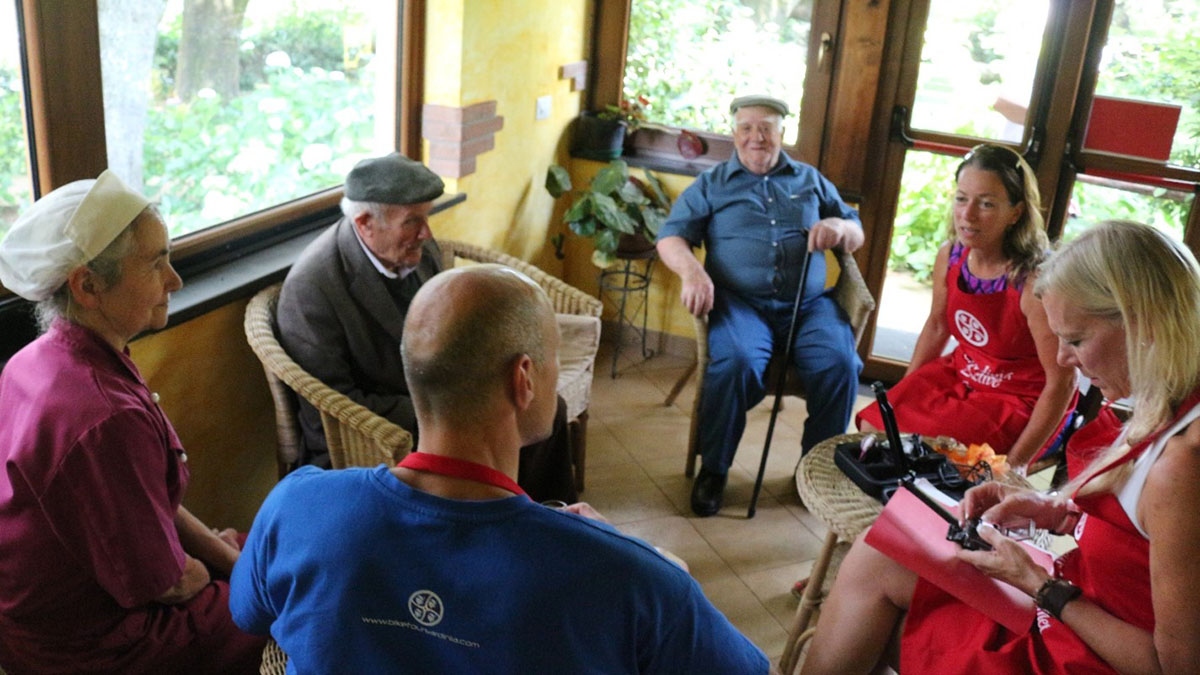 2 of 8: Interviewing the shepherds at a Sardinian agriturismo (farmhouses that accept guests, similar to a bed and breakfast). 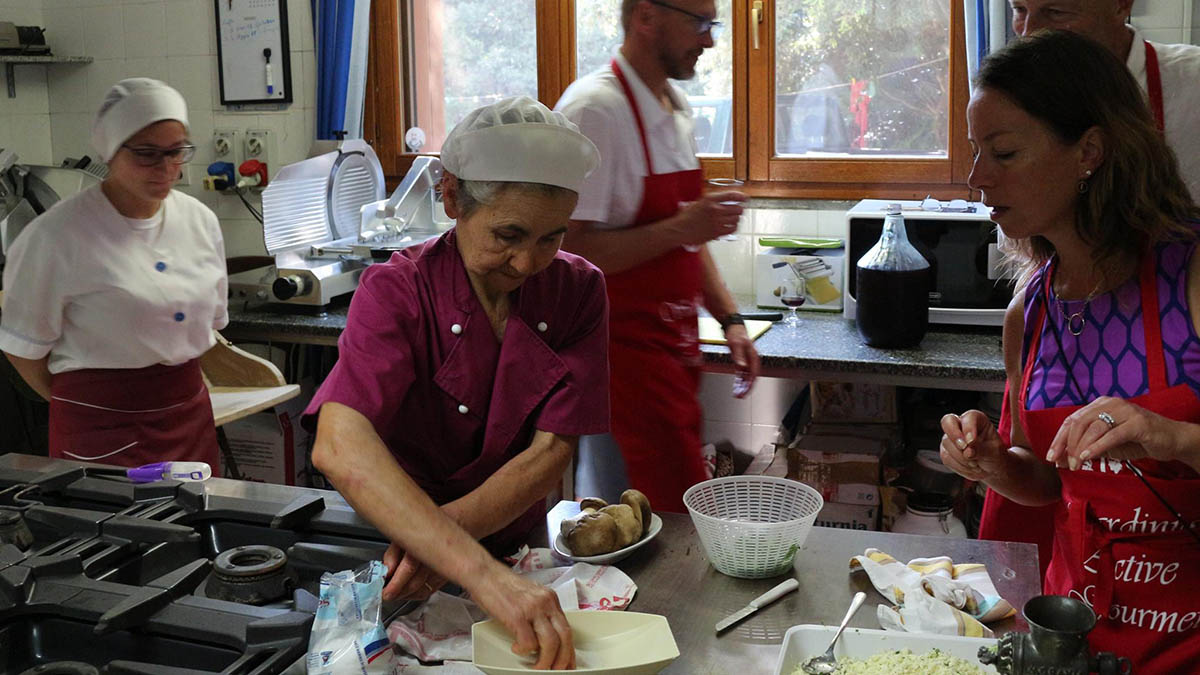 3 of 8: Taking cooking classes from locals in Italy was part of Safaii and Linja’s plans. 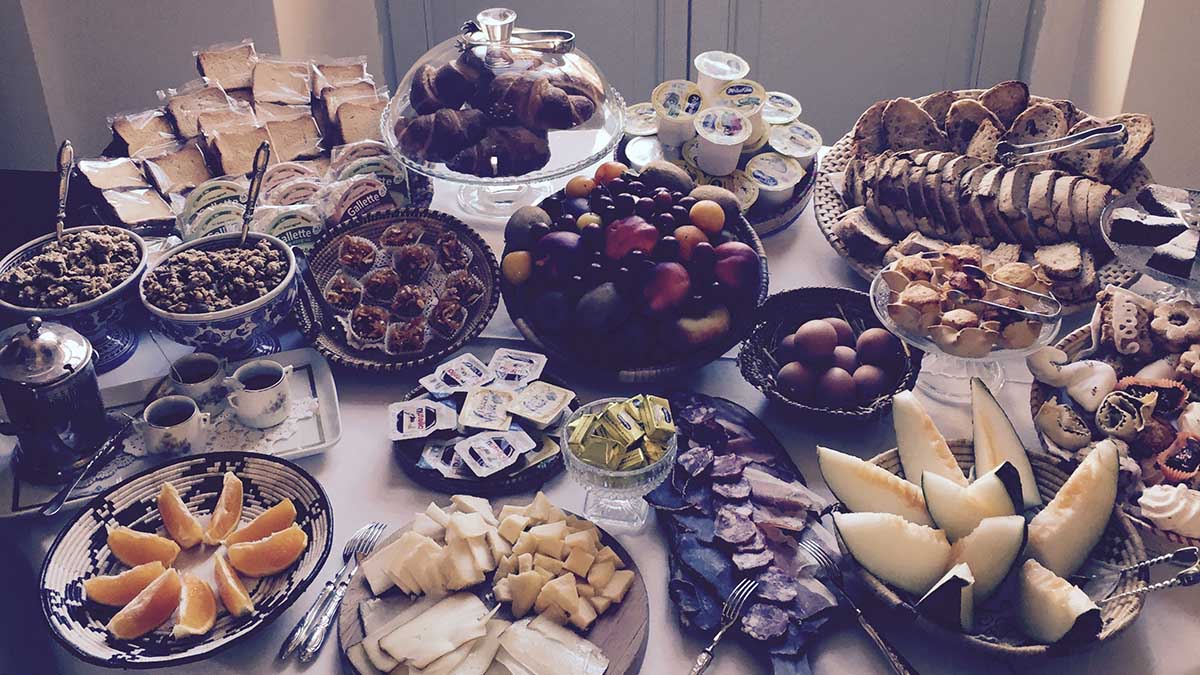 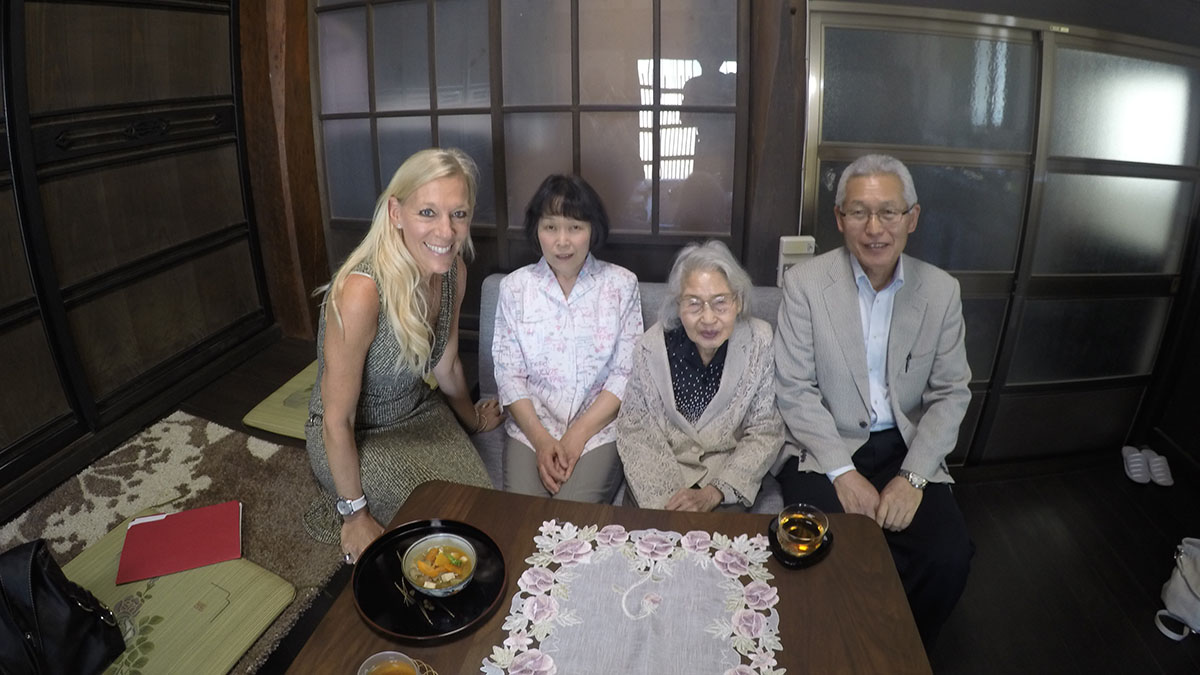 5 of 8: Japanese centenarian Haru Shimizusako, second from right, shared her recipe for Miso soup with Safaii. 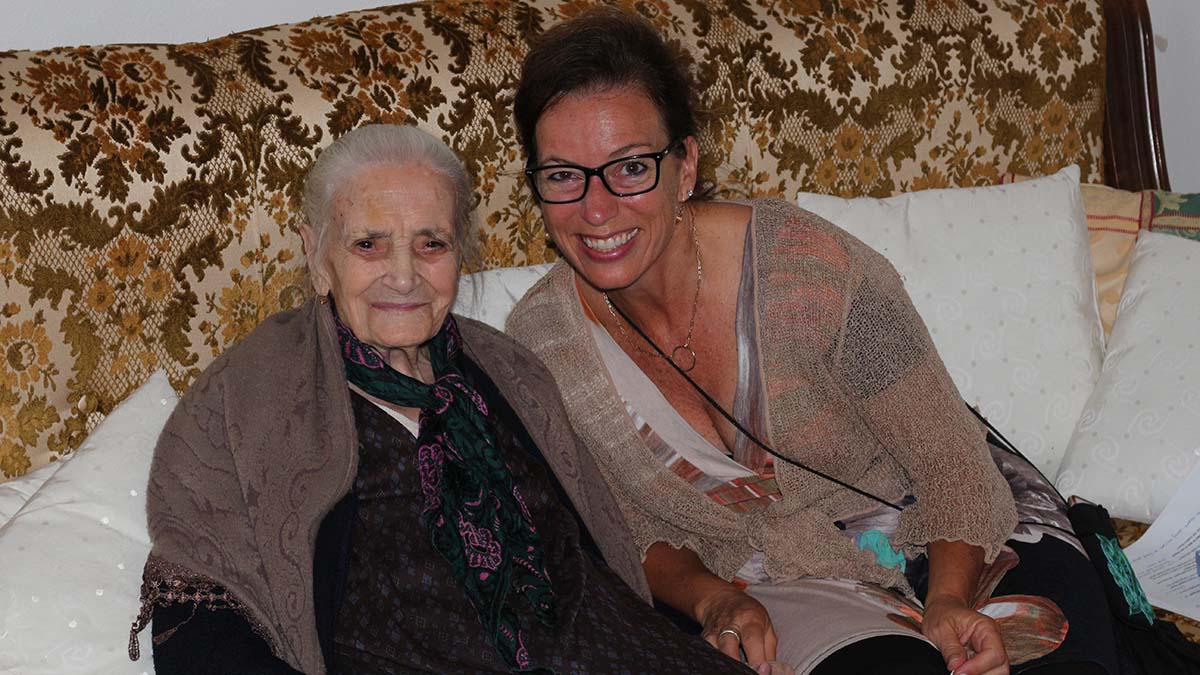 6 of 8: Interview with a woman named Maria in Sardinia. 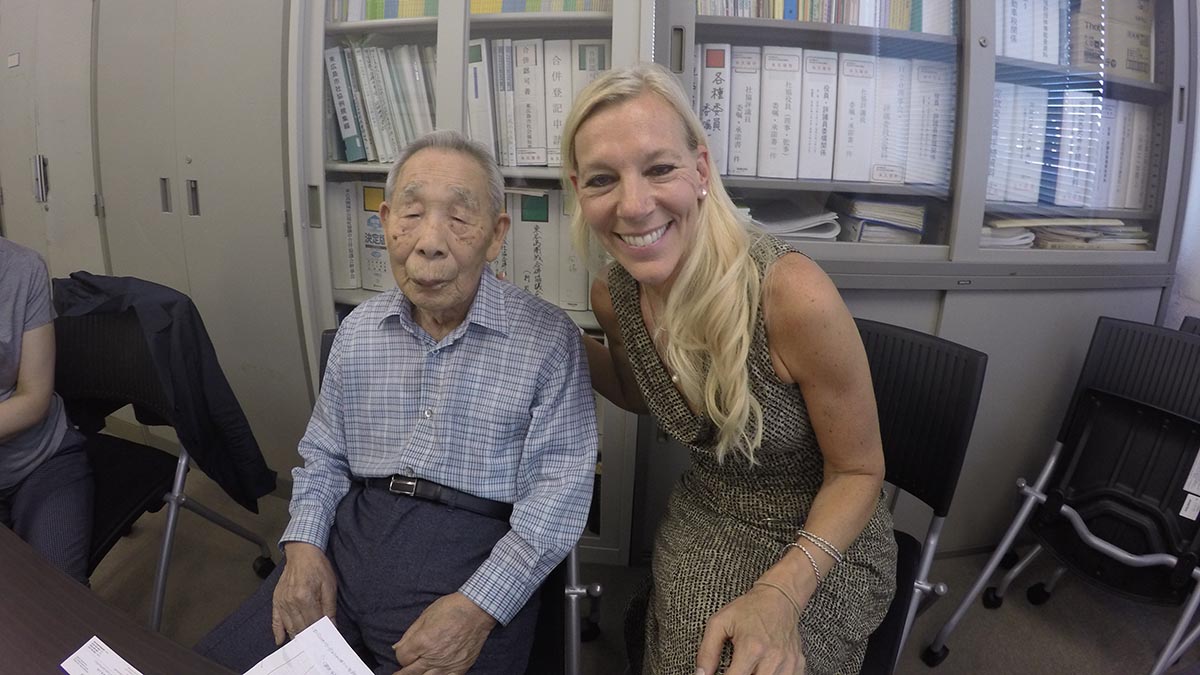 7 of 8: Katsufumi Ikeda was another Japanese centenarian interviewed for Safaii and Linja’s research and book. 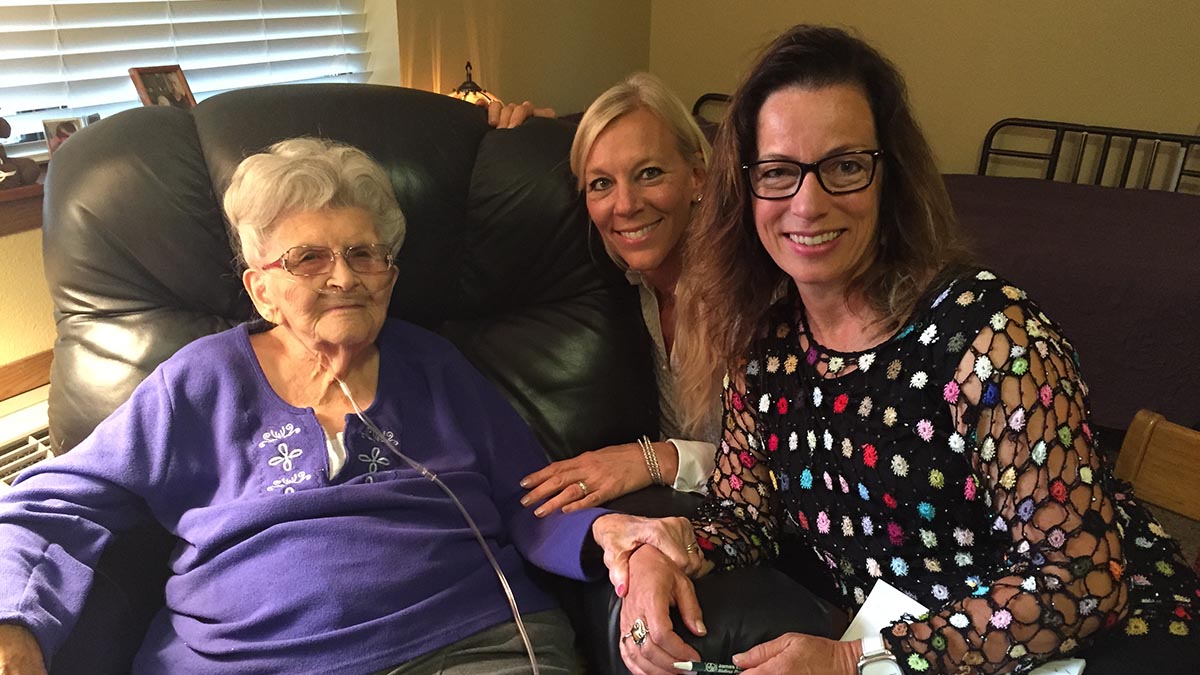 8 of 8: From right to left, Linja, Safaii and 100 year-old Regina Otter, mother of Idaho Gov. Butch Otter, who was interviewed about her diet and daily habits.